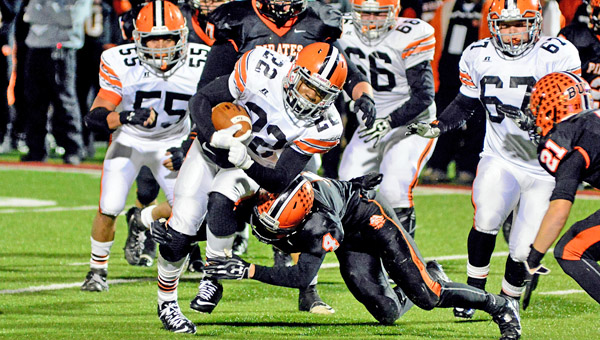 Ironton Fighting Tigers’ running back D’Angelo Palladino (22) slips past a Wheelersburg defender as he gains yardage during Saturday’s Division V Region 17 semifinal game at Portsmouth. Ironton was unable to get its offense going in the second half and lost 38-7. (Kent Sanborn of Southern Ohio Sports Photos)

PORTSMOUTH — Two possessions to start the second half proved to be the two biggest series of the game for the Ironton Fighting Tigers.

Trailing just 14-7 at the half, Ironton failed to moved the ball to begin the second half and the Wheelersburg Pirates capitalized with two scores as they pulled away to a 38-7 win in the Division V Region 17 semifinals Saturday.

Wheelersburg (11-1) will now play in the regional championship game next Saturday against Columbus Bishop Hartley who routed St. Clairsville 42-7.

“The first two possessions of the second half we went three-and-out. Those were key possessions,” said Ironton head coach Mark Vass. “We couldn’t establish our running game like we have all year.”

Ironton was playing without two-way tackle and three-year starter Isaac Sherman who was out with a broken leg and dislocated ankle. They also lost defensive end Lucas Campbell midway through the first half.

“No excuses, Give them credit. They controlled the line of scrimmage. It was a stalemate and they were swarming the ball,” said Vass.

The Fighting Tigers gave the Pirates their first score when they fumbled and Wheelersburg recovered at the 10-yard line.

Two plays later, Austin May scored on a quarterback sneak from one yard out and it was 7-0.

Ironton gave the Pirates a short field for their next score when they failed to convert on a fourth-and-one on their own 49.

Seven plays later Wheelersburg was faced with a fourth and one at the Ironton 29 and May faked the run and threw to Andrew Conn for a 29-yard touchdown pass and a 14-0 lead with 2:44 on the clock.

“The first quarter we dug ourselves a hole,” said Vass. “But the defense stepped up and the offense pounded one in. We were in the game. But when Campbell went out and we had to move some people around.”

Wheelersburg drove to the Ironton 38 but failed to convert a fourth-and-one when a pass to Tyler Jenkins was broken up on a hard hit by Tanner Price.

Ironton then marched 68 yards in 11 plays capped by Desmond Young’s touchdown run from the 6-inch line.

Luke Kelley kicked the conversion and Ironton trailed 14-7 with 6:17 left in the half.

Ironton failed to move the ball to begin the second half and was forced to punt.

Wheelersburg then went 59 yards on five plays capped by May’s 10-yard keeper around the left end and it was 21-7 with 8:49 left in the third quarter.

After another three-and-out by Ironton, the Pirates put the game out of reach with 67-yard, 13-play drive as May went the final inches for the score and it was 28-7 with 1:35 left in the third quarter.

Wheelersburg added an insurance score when Jordan Howard ran 44 yards with 7:31 to play for a 35-7 lead.

Despite the insurmountable lead, Wheelersburg went with an onside kickoff and recovered the muffed ball at the Ironton 26.

After just 104 yards in the first half, the Pirates finished with 340 yards including 260 on the ground. Howard had 116 yards on 12 carries.