Winter will determine progress on bridge 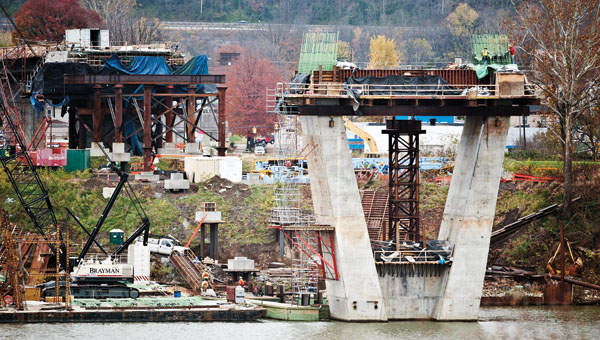 Construction of the new Ironton-Russell Bridge as seen from Russell, Kentcuky, Wednesday morning.

As the temperatures start to drop, so will work on the construction of the Ironton-Russell Bridge.

“We will continue working in the winter but will have a slowdown,” Kathleen Fuller, public information officer for Ohio Department of Transportation District 9, said.

A ceremonial groundbreaking for the more than $80 million project was May 2012 with a completion date then of November 2015.

This May, however, weather delays from the winter of 2013 pushed that date back to April of 2016. Officials now are unsure if the $81 million price tag will hold with expected changeovers.

The tower on the Ohio side is 30 percent complete with five of the 18 segments finished.

“The last section on the Ohio side is to be done by the end of summer,” Fuller said. “Once those are done, they are going to start the cantilever approach and start the panels for that main span.”

If winter proves milder than last year, the target date has a good chance of being met, Fuller said.

“We will not likely have to make up a significant amount of time,” she said. “We are right around 54 percent complete overall.”