Nothing’s changed but the owners 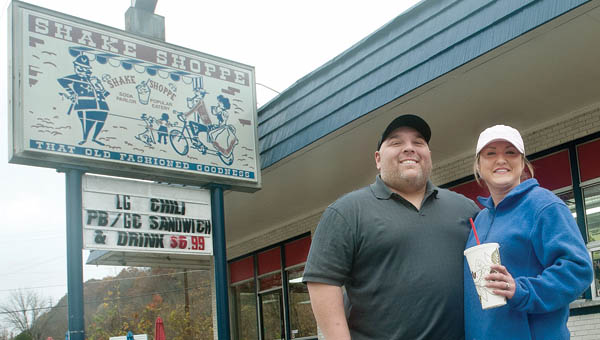 the tribune/jessica st. james
James Hamlin, left, and his wife, Tiffany, are the new owners of the Shake Shoppe on Liberty Avenue in Ironton. The Hamlins bought the restaurant last month.

Hamlins won’t change much at the Shake Shoppe

James and Tiffany Hamlin were looking to buy a small business. When a real estate agent friend of theirs told them the Shake Shoppe in Ironton was for sale, they bought it that day.

James, a former chiropractor, and Tiffany, a cosmetologist, own other small businesses in the Tri-State but the Shake Shoppe, to hear them speak of it, is the one about which they’re most excited.

“We love it and it’s a lot of fun,” James said. “It’s new to us so it’s caused us to have a lot of ideas. We have also found out that running this place is a lot of work.”

The Hamlins bought the restaurant at 1625 Liberty Ave. on Oct. 7 and Tiffany said she, James and the Shake Shoppe’s 11 employees have been working hard ever since.

“Our first few weeks we were really busy,” Tiffany said. “We were told it would slow down during the winter, which isn’t a terrible thing because it will give us more time to get acclimated to the ins-and-outs of running this type of business.”

Some small changes have already been implemented by the Hamlins; since buying the restaurant. They have started taking credit and debit cards. The menu has undergone very minor changes and in March, the Shake Shoppe will become the Shake Stoppe and have a completely interactive website.

“The staff here is great,” she said. “They are hard-working and knowledgeable. Many of them have been working here for a long time.”

Foot-long hot dogs and milk shakes remain the Shake Shoppe’s most popular menu items and beginning next year, James plans to keep the store open late on nights Ironton has a home football game and, when the Fighting Tigers earn a victory, two for the price of one foot-longs will be offered.

The Shake Shoppe has weekly specials that are announced via the restaurant’s Facebook page. Its hours are 11 a.m.-8 p.m. Monday through Saturday and noon-7 p.m. on Sunday.

An honor to know them

SOUTH POINT— Seventeen year-olds Jacob Damron and Sara Thoman, both of South Point, who died on Sunday as a result... read more