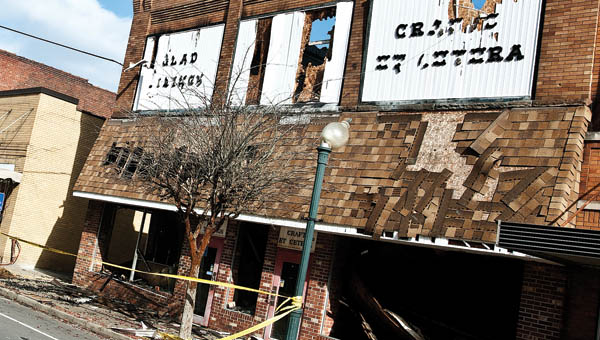 Fruth Pharmacy operating out of other location

A fire at an abandoned building in downtown Ironton left the structure unstable and it will be being torn down today.

“The decision was made on Sunday because of the unstable and hazardous conditions of that building and the immediate surrounding area,” Rich Blankenship, Ironton mayor, said. “The property owner agreed that it needs to come down.”

Blankenship expects the demolition to last several days and upon completion the currently closed portion of Third Street will reopen.

“The street should be back open by the weekend,” he said. “Until then people need to use Second or Fourth streets. Everyone understands — the public and business owners — that this area should be closed because of the building.”

Jack Hager, the same man whose company demolished Memorial Hall, has been hired to perform the demo.

Lonnie Best, brother-in-law of the building’s owner, James Staley, said the goal is getting the building down quickly.

“We have to get it down,” Best said. “It’s dilapidated and right now it’s a danger. It’s a well-built building, though, the walls kept the fire off the other buildings.”

Fruth Pharmacy’s downtown location has been closed indefinitely because of damages sustained from the fire in its neighboring building. Lynne Fruth, president of Fruth Pharmacy Inc., said there will be no break in service.

“At the present time all operations are being run out of our location on State Route 141,” she said. “We will have to look at our downtown location at a later date and see if it is suitable to resume operating out of that store.”

Fruth said the store suffered considerable water and electrical damage and has lost all Internet capability and re-opening is not definite.

“We will have to assess the amount of repairs needed and see if there is any damage that will keep us from moving back in there,” she said. “It’s important that everyone knows there are no controlled substances in that store.”

An employee of another neighboring business, Scherer-Mountain Insurance, said customers are not allowed in their office as a safety precaution but the business is operating as normal.

Blankenship and Fruth praised the efforts of all fire departments involved.

Another step taken toward quiet zone