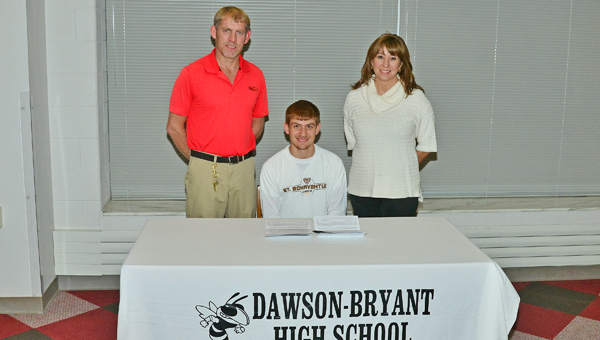 COAL GROVE — A chance meeting led to a golden opportunity.

By the end of the two-day period, Hoops saw all he needed and decided to offer Morgan a scholarship to play for the Bonnies.

“Brent is a great young man and has a lot of talent to become a great Division 1 athlete,” said Hoops.

“I had the pleasure of spending two days with him while I was at the Ohio Am and got a unique look at not just his game, but his attitude and work ethic those two days. I loved his drive and determination.”

Despite being more than seven hours from home, Morgan was excited to play for the Division I program.

“It feels great. I’ve been dreaming of this since I knew about college golf. Whether is was in Ohio or New York, it’s Division I so I’m excited,” said Morgan.

Hoops is familiar with Ohio because he is not only a native of Toledo, but he was an assistant the past two years at the University of Toledo.

St. Bonaventure — with an enrollment of 1,826 — is located in St. Bonaventure, N.Y., near Buffalo, N.Y., Erie, Pa., and Cleveland. The school was the nation’s first Franciscan college.

“I hate seeing him seven hours away, but it was a great offer and (Hoops) showed such great excitement,” said Hornets’ coach Danny Morgan who also happens to be Brent’s father.

Although St. Bonaventure is in New York, Brent Morgan said the Bonnies will venture to many different areas as members of the Atlantic 10 Conference.

“The conference tournament is in Florida, they’re going to California twice and they’re trying to get more tournament in Ohio. And they play at Marshall,” said Brent Morgan.

Hoops was a four-year letter-winner at the University of Loyola-Chicago. He was captain his senior year when he won medalist honors in the Horizon League so he has an eye for talent.

Morgan’s resume shows his talent level. He was a four-time All-Ohio Valley Conference first team and all-district. He was the Southeast Ohio Coaches’ Association Division III District Player of the Year in both his junior and senior seasons.

He qualified for the state tournament three times and finished eighth among individuals as a junior to earn All-Ohio honors.

“I know (Brent) has the tools to already succeed on the golf course, he just needed to find the right opportunity for him to succeed and reach his lofty goals I know he has on his golf game,” said Hoops.

“I think when he was on campus he saw that we have the facilities and support here to help him achieve all he wishes, all while gaining a great education from a fantastic academic institution.”

Morgan is looking forward to the opportunity to play.

“(Coach Hoops) said he’d take me to every tournament they play in. He told me to plan on being in the lineup the first match. He said he guaranteed I play in every match all four years,” said Morgan.

“Of course, I know I have to hold up my end and play well and do the work in the classroom, but the opportunity to play is there.”

Brent is the son of Danny and Christy Morgan.

Williams, Buckeyes get past Marquette

COLUMBUS (AP) — In a measure of how well No. 20 Ohio State is executing, all three players who came... read more