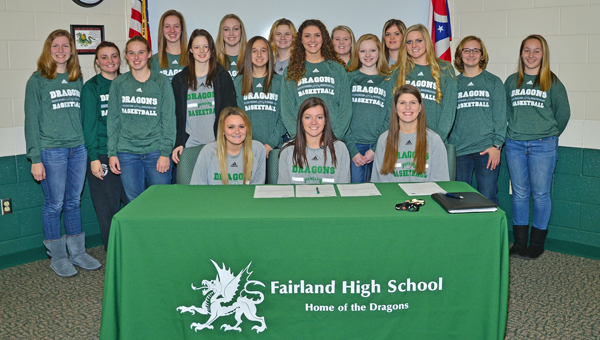 PROCTOVILLE — Bill Toothman wasn’t just a great basketball player. He was a prophet.

Toothman — who died six years ago — was an All-American at Marshall who is 19th on the all-time scoring list (1,326) and helped the team win a national championship under legendary coach Cam Henderson.

He also happens to be the great-grandfather of Fairland Lady Dragons’ senior guard Caitlin Stone who signed a letter-of-intent Wednesday to play basketball at Urbana University.

“When I was in biddy league, he wasn’t doing well, but he would come to my games as often as he could,” said Stone. “He told my mother that he always loved watching me and that I would do great things.”

Stone’s flexibility at the guard position makes her even more attractive to the Urbana program.

“They talked about being a point guard, but they also need a shooting guard. I like that. But I’ll do whatever they want,” said the 5-foot-4 Stone.

Urbana was one of several programs on Stone’s list. She narrowed the choice to Urbana and Anderson, Indiana, and picked the Blue Knights for several reasons.

“(Urbana) was close enough to come home, but far enough away to be on my own,” said Stone. “They run a more fast-paced game and that’s what I like. The like to fast break.”

With her college pick behind her, Stone said she is looking forward to her senior season.

“I think we can go all the way if we work hard. Our pressing (game) will be more up than last year,” said Stone.

Caitlin — who plans to major in early childhood education — is the daughter of Christy and Jason Stone of Proctorville.

BLOOMINGTON, Ind. (AP) — Indiana is hoping Zander Diamont can build on his performance against Rutgers when the Hoosiers visit... read more