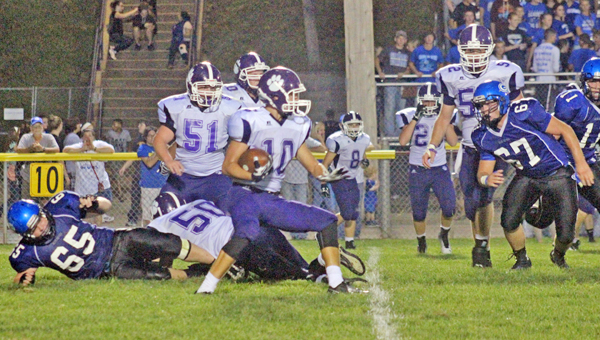 GALLIPOLIS — The Gallipolis Blue Devils will leave the oldest Ohio public school league to join another conference with a long history.

Gallipolis’ Board of Education voted 5-0 on Wednesday to accept the Ohio Valley Conference’s offer to join their league.

“In discussioins with our coaches, school board members and administrators, I think it was something that we had to do and that’s the key thing. We are a good fit for the OVC,” said Gallipolis principal Josh Donley.

“We looked at every avenue in hopes that we could maintain being in the SEOAL, basically because we have great relationships with those schools. This being done with a heavy heart, having to tell those guys that you have spent this much time with and respect that your are moving in a different direction.”

The Blue Devils won’t be able to join the league in football until 2016 but could join in other sports as early as 2015-16.

Gallipolis is currently a member of the Southeastern Ohio Athletic League that also includes Jackson, Logan and Vincent Warren. The league has dwindled over the past seven years due to travel.

School officials met with SEOAL representatives on Wednesday morning at a league meeting and announced their intentions.

The addition of Gallipolis give the OVC eight teams. Ironton and Portsmouth were recently admitted. Gallipolis will be the largest school in the conference.

Having been a charter member of the SEOAL made the decision to join the OVC extremely difficult.

“In some ways, I’m not entirely excited about leaving, but I am very excited about our kids future and the kids are excited about the move. Our scheduling becomes a little easier and it also allows us to have a fresh start and build some excitement.”

Simms said some people in the community hated to leave the SEOAL for historic reasons and others for sentimental reasons due to their long association. However, the shrinking population necessitated the move.

“We’ve put ourselves in a stable league with schools that have tremendous traditions,” said Simms. “We are going to go up against schools that have just recently competed in state tournaments in basketball and have won state titles in football, as well as other great accomplishments in a variety of other sports.”

According to enrollment numbers by the Ohio High School Athletic Association released in 2013, Gallipolis would be the largest school in the conference.

Enrollment numbers are based on the number of boys and girls in grades 9-11.