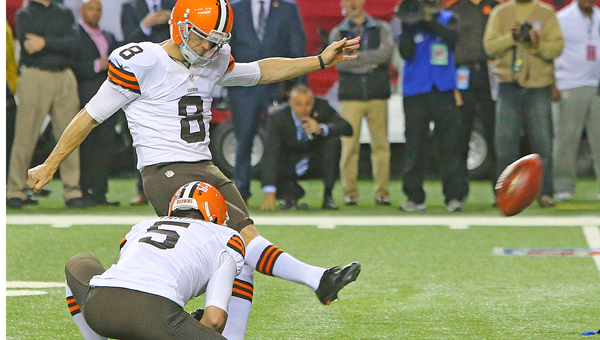 ATLANTA (AP) — After being suspended for Cleveland’s first 10 games, Josh Gordon had no trouble remembering how to play the game.

Fortunately for the Browns, Brian Hoyer was able to forget some costly mistakes.

Gordon turned in a huge performance in his first game of the season, catching eight passes for 120 yards, and Hoyer shook off three interceptions to lead a drive in the final minute that set up Billy Cundiff’s 37-yard field goal as time expired Sunday, giving the Browns a 26-24 victory over the Atlanta Falcons.

Taking advantage of the last of Hoyer’s picks, the Falcons drove for Matt Bryant’s 53-yard field goal with 44 seconds remaining to seize the lead.

Turns out, they left too much time on the clock.

Hoyer completed four straight passes, including a 24-yarder to Gordon down the middle of the field. The last of the throws went to Miles Austin, who took it to the Falcons 19. The Browns (7-4) hustled to the line, spiked the ball with 5 seconds left, and sent on Cundiff for his fourth field goal of the game.

“Nothing to lose, really,” Hoyer said. “Go out and play fearless. That’s all I have at that point.”

After serving his punishment for violating the league’s substance abuse policy, Gordon started for Cleveland and was targeted a game-high 16 times.

“How did I hold up? Pretty good,” he said. “The adrenalin will keep you going.”

The Falcons (4-7) came in on a two-game winning streak and improbably tied for first with New Orleans in the woeful NFC South.

With another fourth-quarter meltdown, Atlanta dropped to 0-7 against teams outside its division.

Georgia native Isaiah Crowell scored a pair of touchdowns for the Browns, but it was Gordon who had the biggest impact.

His longest catch was the last one, taking the Browns to the Atlanta 45. Hoyer followed with a 15-yard completion to tight end Gary Barnidge, who bounced off a couple of tacklers to pick up some extra yards. Austin’s 11-yard reception gave Cundiff an easy look.

“All we had to do was keep them from kicking that field goal,” Falcons linebacker Paul Worrilow said. “You’ve got to make a play at that point.”

Hoyer, who was 23 of 40 for 322 yards, nearly gave it away for the Browns. The first of his picks turned the momentum in Atlanta’s favor, leading to a touchdown that put the Falcons ahead 14-13 at halftime when it looked as though Cleveland might have a commanding lead.

In the fourth quarter, the Browns had first-and-goal at the Atlanta 6 and a chance to make it a two-score game when Hoyer, after scrambling out of trouble, inexplicably threw it up for Gordon in the back of the end zone instead of just tossing it away. Desmond Trufant made a leaping interception to keep Cleveland’s lead at 23-21.

Atlanta was forced to punt with just under 4 minutes left, and Hoyer made another huge mistake. This time, he floated a deep pass down the sideline, only vaguely in Gordon’s direction, and Dezmen Southward came up with his first career interception.

“I’m so disappointed in myself right now,” Hoyer said. “That’s not how I play. I don’t throw dumb interceptions.”

Matt Ryan guided the Falcons into Bryant’s range, but there were again clock-management issues for a team that blew a game against Detroit by not running off enough time in the closing minutes.

On third-and-2 at the Cleveland 35, Ryan’s pass was batted down to stop the clock.

The Browns had enough time to win it.

Crowell, who spent one troubled year at the University of Georgia before being kicked off the team, scored on runs of 11 and 26 yards.

Ryan threw for 273 yards and a pair of TDs, going to Julio Jones on a 24-yarder and Jacquizz Rodgers from 8 yards. Steven Jackson scored Atlanta’s other TD on a 1-yard run, giving the Falcons a shot after the Browns dominated the third quarter for a 23-14 lead.

Ryan also had an interception and a fumble on back-to-back possessions in the first half, leading to a pair of Cleveland field goals.

Notes: Cundiff came up short on a 60-yarder at the end of the first half, and Devin Hester nearly took it back for an Atlanta touchdown. He went 75 yards before being dragged down at the Cleveland 31. … Cleveland S Tashaun Gipson was taken off on a cart after injuring his right leg in a collision with teammate Joe Haden. Gipson will have an MRI on Monday.