Hoke’s job on the line in ‘The Game’ 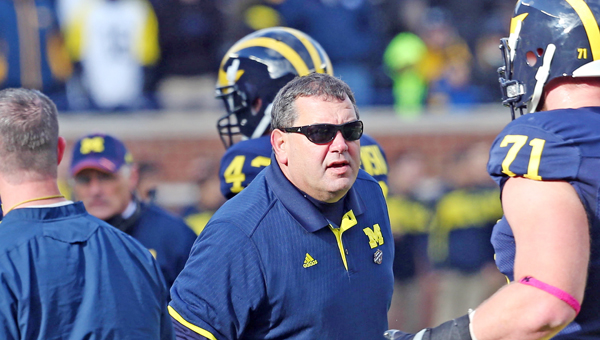 Michigan head football coach Brady Hoke’s job may be on the line as the Wolverines play at rival Ohio State on Saturday. (MCT DIrect Photo)

COLUMBUS (AP) — Brady Hoke refuses to contribute to the speculation about his job security.

Hoke batted aside questions about his future with the Wolverines on Monday and instead spoke mainly about his team’s preparation for its upcoming annual grudge match with Ohio State.

“They can speculate and all that,” Hoke said. “If I get distracted with what we’re doing that’s not fair to those 115 kids. I’ve never worried about a job.”

The familiar foes meet for the 111th time on Saturday at Ohio Stadium. The No. 7 Buckeyes (10-1, 7-0 Big Ten, No. 6 CFP) have clinched a spot in the conference title game but their hopes of making the four-team national playoffs might well be affected by the battle with their chief rivals.

“People talk about the playoff system and all that,” linebacker Joshua Perry said. “That’ll handle itself. But we’ve still got to take care of what we’ve got to do.”

The stakes are much, much different for the Wolverines.

Michigan (5-6, 3-4) needs a win just to be bowl eligible, in addition to momentarily quieting the talk about Hoke’s future.

Hoke is 31-19 in his fourth season with the Wolverines, but there has been a steady decline on the field, in his record and in attendance at The Big House.

If he feels the temperature rising underneath him, he has not betrayed that to his players.

“It speaks volumes of (Hoke’s) character that he comes into the building with the same passion that he’s had from day one,” said center Jack Miller.

Just three seasons ago, Ohio State was going through a similar situation. Luke Fickell, who was elevated from defensive coordinator when Jim Tressel stepped aside in the wake of a tattoo scandal, had his job on the line when he took the Buckeyes into the game against Michigan.

“I felt that, definitely,” said Buckeyes cornerback Doran Grant. “Being a true freshman at the time a lot of the older guys kind of grabbed us by the neck that week to get us ready. They let us know how serious this game is.”

Michigan won that game 40-34, and Fickell was not retained as head coach. He remains the Buckeyes’ coordinator.

Ohio State captured a school-record 24th consecutive win when safety Tyvis Powell picked off Devin Gardner’s two-point conversion pass with 32 seconds left to preserve a 42-41 victory. But that was almost overshadowed by what happened in the second quarter.

A fight broke out that led to three players being ejected. As Ohio State lineman Marcus Hall left the field at Michigan Stadium, he slammed his helmet to the ground and then saluted the crowd with a double-fisted obscene gesture.

“(Coach Urban Meyer) said he wants the game to be very intense, but if anybody throws any punches this year we’re just dismissed,” linebacker Curtis Grant said. “So we have to be on our best behavior.”

The Buckeyes have dominated the series lately, winning 11 of 13, with one of those victories on the field later vacated due to the scandal on Tressel’s watch.

Ironically, Meyer has already had a closeup look at a coach losing his job the week of the Michigan-Ohio State game.

His real immersion in the rivalry came when he was a graduate assistant under Earle Bruce in 1986 and 1987 at Ohio State. Despite a solid record over nine seasons, Bruce was unceremoniously canned five days before the 1987 Michigan game. The Buckeyes, sporting headbands with their coach’s name written on them in felt-tip markers, went on to upset the Wolverines in Ann Arbor later that week.

Asked whether players are motivated to save a coach’s job, Meyer conceded he hadn’t thought much about it.

Then he added, “I coached for a man who lost his job (the week of the Michigan game), not that that has anything to do with this. But I met with the defensive staff this morning and their personnel will play their very best against us.”

CLEVELAND (AP) — A Browns fan who says he wanted to give Johnny Manziel “a hug” was struck by the... read more