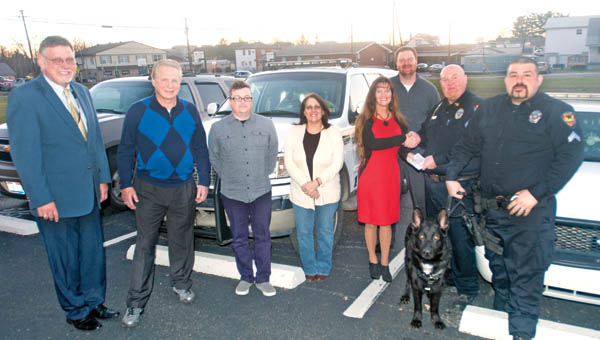 COAL GROVE — In a little more than a week on the job, the Coal Grove Police Department’s new drug dog has paid for nearly 20 percent of himself.

The $8,500 125-pound 2-year-old full-blooded black German shepherd was purchased through donations from local individuals, businesses and others entities. The largest single contribution, which was $3,000, came from the Dawson-Bryant Board of Education and board members met Jango for the first time and presented the check on Monday at its regular meeting.

“In a little more than a week he has helped us get $1,600 in fines in mayor’s court,” Mike Delawder, Coal Grove police officer and Jango’s handler, told the school board. “He’s been deployed six times and already performed a building search for Ironton and helped apprehend the suspect.”

Delawder praised the school board for its decision to donate. He said the board’s financial assistance is a testament to its members’ dedication to fighting the drug problem.

“Most people who donated were local individuals and mom-and-pop businesses that have experienced the drug problem firsthand,” he said. “We know having this dog will not cure the drug problem, but he can for sure make a dent in it. (The school board) really can’t have a better asset at your disposal, especially for a village the size of Coal Grove.”

“(Jango) stays with the Village of Coal Grove until he retires,” Spurlock said. “If (Delawder) were to leave, another officer would become his handler. This dog is for Coal Grove and Coal Grove schools. If you need this dog for anything, all you have to do is let us know.”

The school board officially entered into a contract with the police department on Nov. 21. According to the contract, the one-time, lump sum payment of $3,000 from the school board results in “ongoing service” of Jango to the district as well as provide K-12 students with “drug prevention/intervention services so long as the drug dog remains in active law enforcement services.” Also stated in the contract is use of Jango at any school facility outside village limits “shall be for informational or public relations purposes only, not for law enforcement purposes.”

Delawder said the average service time for a drug dog is 10 years.

“This is a very positive thing for Coal Grove and Dawson-Bryant schools,” Brady Harrison, board member said. “We are excited to have him here.”

Delawder described Jango’s temperament as obedient and loyal. He said he’s good with people, especially children, and other animals.

“He really is a big baby,” Delawder said. “When his collar is off and he knows he’s not working, he’s basically a lap dog. He is terrified of guinea pigs for some reason.”

Even though Jango has been purchased and is already working, Spurlock said donations are still coming in. The department recently received checks from Marathon Petroleum Corporation in Catlettsburg and the Ironton Elks.

“It proves how bad the drug problem is when people are still willing to donate,” Spurlock said.

Jango understands a total of 27 commands in both German and English. He wears an official Coal Grove badge on his collar and is referred to as “officer Jango.”

FOI will soon be sole owners of Ro-Na