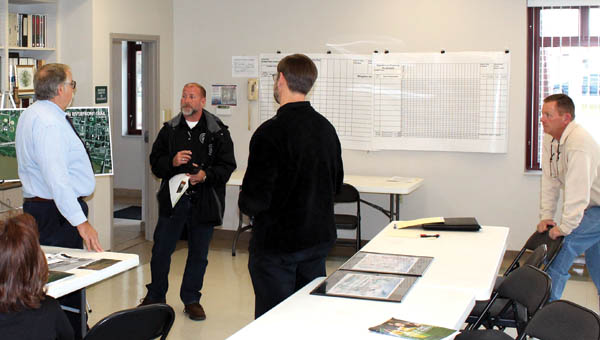 The Tribune/Dustin Melchior
A public meeting about a proposed shared walking and bike trail on the Ironton riverfront was attended by many residents who asked questions and shared ideas. Construction on this phase of the trail should begin in July of 2015.

The city of Ironton had a public meeting on Monday to share plans and take comments about a proposed riverfront shared walking and bike trail.

“We are required to have a public meeting to gather ideas on the trails and bike path,” Blankenship said. “People asked a lot of good questions and offered some great ideas.”

Some questions posed at the meeting were about the capability to exercise along the trail, proper lighting and walkers and bikers crossing Second Street at Storms Creek.

“Every question was a good question and what this meeting did was show everyone involved in this that the public does have interest in the project,” Blankenship said. “We will look at any and all concerns and address them accordingly.”

The project is being developed by the city in conjunction with the Ohio Department of Natural Resources, the Ohio Department of Transportation and the KYOVA Interstate Planning Commission. The finished trail will run from the Transit Center on Second Street, pass through the existing floodwall opening and continue west to the North Second Street Bridge over Storms Creek.

Four grants are in place for the overall project and the bicycle and walking trail is progressing because of $100,000 in grant money administered through the Ohio Department of Natural Resource’s (ODNR) NatureWorks program.

Time for family, not shopping

In just two days, millions around the country will gather with family and friends to enjoy the Thanksgiving holiday. Unfortunately,... read more