Buckeyes have bigger game after Michigan 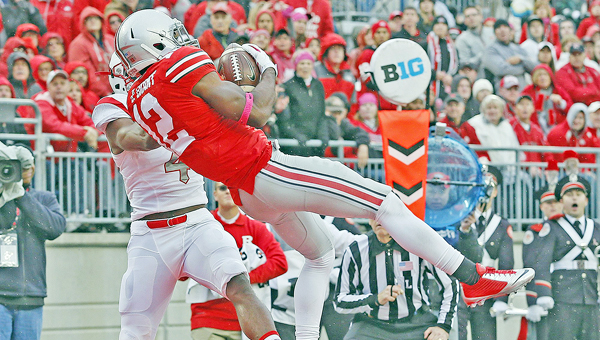 COLUMBUS (AP) — The Ohio State Buckeyes have talked all season about playing for championships in November.

Now that they really are, can it be a distraction?

Moments after that showdown ends, they’ve got to begin gearing up for the Big Ten championship game in Indianapolis against the Saturday’s winner of the Minnesota at Wisconsin game.

Coach Urban Meyer said the Buckeyes taking on Michigan and then playing for the league title on consecutive Saturdays is a challenge. But he also says it’s something that must be overcome.

“When I was at Florida we had to deal with that (rival Florida State) game” before the Southeastern Conference championship in 2008 and 2009, said Meyer, the Gators coach from 2005-2010. “That’s real. But embrace it, take advantage of it, love every moment. There’s only one way to enjoy every moment and that’s to (win).”

This stacked schedule near Thanksgiving is a new phenomenon at Ohio State. Every year from 1935-2012 except one (wartime 1942, when they closed with the naval preflight program, the Iowa Seahawks), the Buckeyes ended their regular season with the Michigan game.

Then last year, they clinched what was then known as the Leaders Division title. Then they struggled to hold off Michigan when Tyvis Powell intercepted a two-point conversion pass with 32 seconds left to lock up a 42-41 victory.

A week later, Michigan State’s offense continually reeled off big plays in a 34-24 upset that ended the Buckeyes’ 24-game winning streak and their hopes of playing for a national title.

The Buckeyes (10-1, 7-0 Big Ten, No. 6 CFP) say there’s no doubt that Michigan (5-6, 3-4) has their full attention this week. But at the same time they also know they still have another big game just around the corner.

Still, at times Michigan sounds like an appetizer rather than a main course.

“A lot of of guys in our class are like, ‘We haven’t won anything since we’ve been here.’ We’ve won a couple Eastern Division championships, but we haven’t won a Big Ten title or anything bigger than that,” senior cornerback Doran Grant said. “That’s our main goal, to win the Big Ten championship — and of course beat the team up north.”

The Buckeyes are also in contention to play for a national championship. But defensive tackle Michael Bennett says such distractions fall by the wayside once the opening whistle is blown.

“Once you’re in the game, it’s only about the game,” he said. “You’re not, midgame up seven points, saying, ‘OK, well, now we’re going to the Big Ten championship.’ Or you’re down seven and it’s, ‘Well, we’re out.’ It’s all about that team and taking care of business with that team.”

Some feel that playing well in the first game carries over to the second.

“We know we have to prepare as well as we have for any game. They will come out and give us their best swing,” wide receiver Evan Spencer said of the Wolverines.

“We have to be able to take it and give ours back. I feel if we go out and there and do what we need to do, it will bode well for us.”

Tight end Jeff Heuerman talked at length about Michigan, then was asked if his career has been everything he thought it would and could be.

“We started the season competing for championships in November and we’re right in the heat of the thing,” he said. “We’re gonna be in Indianapolis next weekend, and after that we’ll see what the rankings do for us.”