What do you bid? 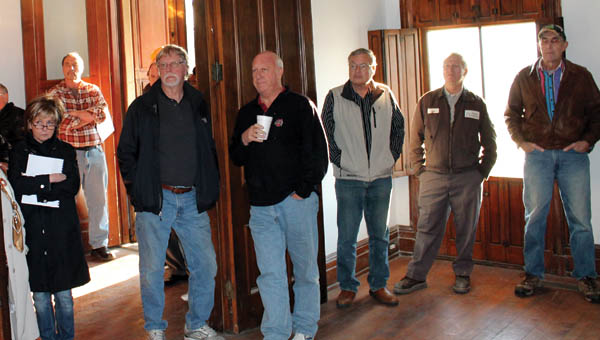 the tribune/dustin melchior
People in attendance at the auction.

SOLD. The auctioneer cried out and Tiffany Corbin threw her arms around her father’s neck. The Tower House was hers.

In less than 20 minutes what was once a premier house in Ironton that knew better days got a new owner: Dwight Hensley, of Flatwoods, a customer service specialist for AT&T’s Ironton office.

About 30 people, more curiosity seekers than potential buyers, hugged the sides of a first floor room and entrance hall as Mike Baker from Midwest Realty and Auctioneers, outside of Dayton, put Frederick Norton’s dream house, a Queen Anne-style mansion on South Fourth Street, on the auction block

The winning bid came in almost $80,000 under its assessed county tax value of $154,580. Midwest handled the auction because of work the realty firm had done in the past for Community Bank and Trust in Ashland. The bank foreclosed on the property when it was owned by Jeremy Chapman. Chapman bought the house from the estate of Robert Price, who owned it until his death in December 2008.

Before it acquired the deed to the property, the bank had paid off five years of delinquent taxes or $8,736.45.

Norton, who built the house in 1874, was the owner of the North and Belfont iron works. Because of a four-story tower on the side of the structure, it is colloquially referred to as the Tower House.

“I don’t know what it’s worth,” Baker said. “No one else knows that. That’s the truth. But this is a great opportunity. We’re on the wrong side of $100,000. Unless you have endless pockets, you can’t build anything like this. It’s the price of a new pickup.”

Then Baker hit $75,000. Bidders stopped. Baker asked the bank if it would take that bid. Hensley bought himself a mansion that he wants to renovate for his daughter.

“I’d love to restore it,” he said. “I’m going to try to keep it as original as we can. We prayed about it and had our bid. If the Lord wanted us to have it, he would give it to us.”

As the Hensley family posed for photographs on the front porch, Baker got the paperwork ready. Hensley’s wife handed over the $3,000 deposit with the rest coming in 35 days.

Thirty-three of Ohio’s 88 counties offer tax lien sales as a way to recoup back property taxes, according to county... read more