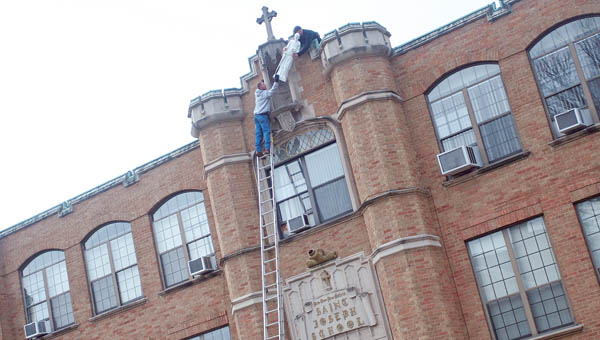 Brian Dufore, left, grabs onto a statue of St. Joseph being handed to him by Ryan Cornett, right, to place in the niche above the front entrance at St. Joseph. The statue was purchased with a donation from the estate of a deceased parishioner.
the tribune/brandon roberts

School gets statue to display in front

A donation from the estate of deceased Ironton native Robert Campbell was used to purchase a statue of St. Joseph for St. Joseph High School.

Father David Huffman said a woman named Nancy Valente handed him a $1,000 check after he officiated at Campbell’s graveside service in 2008.

“After the funeral Ms. Valente gave me money from Mr. Campbell’s estate to buy the statue,” Huffman said. “We would have done this a long time ago, but we had to take time to find the right size and one that would stand up to the weather.”

Huffman said he finally found the perfect statue at a company called Christian Brands in Lewisburg, Tennessee. The statue is 48-inches tall, weighs around 30 pounds, is made of wood with a plaster cast and is kept sturdily in place by epoxy.

The first statue was delivered three weeks ago but was broken upon arrival. Huffman said the school kept the broken statue and will display it somewhere in the school.

St. Joe’s building was built in 1924 and the only statue displayed on the niche in front was a small, 18-inch tall statue that wasn’t very visible. The niche is 40 feet above the ground at the school’s main entrance facing Sixth Street.

“This one is taller and brighter. It’s made of wood so weighs very little and is easy to handle,” Huffman said. “It looks great. We are happy with it.”

Today is time to be thankful

Today on Thanksgiving Day, there are many things we should be thankful for. So what are some of those things... read more