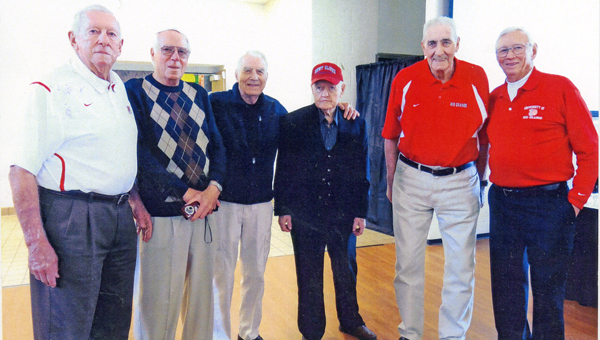 RIO GRANDE — College basketball is renown for its programs with great tradition and dynasties.

Kentucky has the most all-time wins and the second-most NCAA national championships with eight. UCLA is the all-time leader with 11 NCAA titles including 10 in a 12-year span under legendary coach John Wooden.

North Carolina is second on the wins list and has five national championships in the Tar Heels’ trophy case.

But none of those programs or any other long-sustaining programs shook the gym floors of college basketball like the tiny program at Rio Grande College 60 years ago during a brief two-year run from 1952-54.

When Coach Newt Oliver arrived at Rio Grande, the small college had just 94 students and only 38 were males. The gymnasium floor was tile, the roof leaked and there were fewer than 200 seats. The school was on the verge of closing its doors forever.

That would change rapidly.

Oliver came to see the school’s president Charles E. Davis and with the coach was a player whose talents basketball had never seen before and would rarely be rivaled anywhere in basketball for decades to come: Clarence “Bevo” Francis.

Oliver talked of his plan to put the school on the map and vowed to the Rio Grande president that if they allowed him to work his magic, “you’ll be farting in silk panties.”

Oliver was true to his word. With an offense built around Francis that dismantled its opponents, Rio Grande went 39-0 in the 1952-53 season and won the NAIA national championship.

But that was just the start. Oliver put together an even tougher schedule for the 1953-54 season that went barnstorming across the country taking on some of the nation’s top programs with great success and fans jammed into the gymnasiums looking to see Francis play.

“Attendance was great. Every place we played it was packed,” said former Coal Grove star Dick Myers who was a freshman on the 1953-54 team and is now a member of the school’s athletic Hall of Fame.

“I’d never been on a plane and we were going to Buffalo, Miami, Fla., Raleigh, N.C. We played at Wake Forest, Madison Square Garden, the Boston Gardens, Butler Fieldhouse and the Cincinnati Gardens. When I look back, I couldn’t realize what was taking place at the time. You didn’t know books would be written about it. Everyone came to see what Rio Grande was.”

Born Sept. 4, 1932, in Hammondsville, Ohio, he was the only child of Clarence and Anna Francis who had six children from earlier marriages. The elder Clarence Francis worked in the clay mines while his mother tended their farm.

As a youngster, Francis missed two years of school due to anemia. It was during that time that he began to grow taller and soon became active in sports. Bevo said he spent as many as eight hours a day practicing.

Francis attended Irondale High School but transferred to Wellsville. He was declared ineligible minutes before his first game when the superintendent called the Ohio High School Athletic Association to confirm his status.

The coach at Wellsville happened to be Oliver who gave Francis the No. 32 jersey to match how many points he was expected to average. Francis failed short of those expectations, but only by a couple of points. His average was 30.6 as he led the team to a 23-2 record.

But Francis turned 20 and his high school eligibility was finished. Bevo had already married Jean Chrislip when he was a sophomore and he had a son, Frank, by his junior year.

Oliver took off for Rio Grande College and brought Francis with him. At Rio Grande, Oliver enrolled Francis in the local high school to make sure he completed his final one and one-half credit hours.

But it was Oliver — who will turn 91 on Christmas Day this year — who was at the forefront of the two-year run that saved the school and put college basketball on a new path.

Francis was a 6-foot-9 scoring machine. In 1952-53, he averaged 48.3 points a game that still stands as an NAIA record. On Jan. 9, 1953, Francis scored 116 points against Ashland (Ky.) Junior College for an all-time record, but the NCAA and NAIA did not count the game or record because games were not acknowledged if they were played against schools that were junior colleges, military bases or bible seminaries.

If the 116 points had been allowed, Francis would have averaged 50.1 points a game. In fact, Francis scored 1,072 points for the entire season to eclipse the old record by 21 points that was set the previous year by Johnny O’Brien of the University of Seattle.

But the dismissal of the record proved to be no problem for Oliver. On Feb. 2, 1954, in the Jackson (Ohio) High School gym, Oliver set up a game plan that enabled Francis score a record 113 points against Hillsdale College of Michigan as he made 38-of-70 field goal attempts and converted 37-of-45 at the foul line.

Francis’ final scoring average for the season was 46.5 points per game.

The closest player to challenge Francis’ scoring record was LSU phenom “Pistol” Pete Maravich who averaged 44.5 points a game in 1970. The LSU coach happened to be Press Maravich, Pete’s father.

But there was more to the Rio Grande team than just Francis even though he scored most of the points and was the main attraction.

Wayne Wiseman led the NAIA in field goal accuracy at .629 percent and also had 388 assists. Wiseman was from Waterloo High School, the same program that produced the famous Waterloo Wonders who won back-to-back Class B state championships in 1933-34.

Jim McKenzie from nearby Catlettsburg, Ky., was a starter and another outstanding basketball player. McKenzie and Wiseman both had careers in coaching with Wiseman being named to the Ohio High School Basketball Coaches’ Hall of Fame.

McKenzie was a heralded golfer winning the Ohio state left-handers tournament in 1978 — its first year of existence — and again in 1982.

Players such as Dick Barr, Don Vynalek, Jake Gossett and Bill Ripperger also were instrumental in the success of the program.

Myers himself spent 40 years as a high school basketball coach and an athletic director. After a year at Decatur High School in Blackfork, Myers went back to his alma mater in Coal Grove. The next year he took the job as the head coach at Ironton and held the job from 1966-72 before moving to Florida where he coach Auburndale for 24 years including a Class 5A state runner-up in 1983.

“Those other players could play,” said Myers. “We didn’t go and beat Wake Forest with just Bevo. They knew their roles well.

“Bevo was a great shooter, but he was a very unselfish player. If you were open, he’d hit you with a pass. The other players could shoot and did shoot. Wayne did a good job of getting (Bevo) the ball. If Bevo wasn’t open, Wayne would hit the open shot. McKenzie was an excellent ballplayer and outside shooter.”

Oliver — from Byesville and a member of the Ohio Basketball Hall of Fame — was the architect who designed, built and instructed Rio Grande to the 39-0 record in 1953, a record that still stands as the longest undefeated season in the history of college basketball.

Ironically, Oliver led the nation in scoring as a player during the 1947-48 season with 725 points. During that season he also set two national free throw records.

Although Rio Grande was an NAIA school, Oliver schedule 27 of its 28 games the next season against schools who met NCAA standards. The team hit the big stage on Dec. 3, 1953, when Rio Grande played Adelphi in New York’s Madison Square Garden with more than 14,000 fans. Everyone came to see Bevo.

“He didn’t like the limelight,” Myers said of Francis. “He was very personable, easy going. He loved to hunt. Everyone got along on the teams. There was no animosity among the players. We were traveling all the time and eating good food. It was a great time.”

The game at Madison Square Garden was disappointing for Rio Grande as Francis was “held” to 32 points and only four in the second half of an 83-76 loss.

Newspapers and fans said Rio Grande had put up big numbers against bad team. The school’s reputation was tarnished, but only for 24 hours. The next night in Philadelphia, Francis scored 39 and Rio Grande lost 93-92 in overtime to Villanova.

“I made every trip and I was just glad to be there. I got in the game when Bevo scored 113 points. Newt prolonged the game by fouling so Bevo could score Just the excitement of being downtown New York at Christmas was something else,” said Myers.

“I learned a lot working and playing against that team. I grew up. It made me a better player the next three years. I wouldn’t say one bad thing against Rio Grande. It was such a great experience. It is hard to put into words.”

During a Christmas tournament at Wake Forest, Francis scored 32 in a 92-77 loss to N.C. State. The next night he hit the winning jumper in the final seconds as he scored 32 points in a 67-65 win over Wake Forest.

“The reason I went to Rio Grande was because of their schedule,” said Myers who went on to start his final three years at Rio Grande and averaged 18 points a game as a senior when he was third in the nation in field goal percentage at 64 percent.

“My coach was (James) Red Dutey and my senior year he took me to Rio Grande and introduced me to Newt. He showed me the schedule and that’s what sold me. I was just happy to be up there. It was a nice college in the woods and we never had a losing season. Herman Bush came in after Newt left and did a good job.”

Following the 1953-54 season, Oliver signed a contract with the Harlem Globetrotters for $30,000. Oliver would be the coach and Francis the star attraction of the Globetrotters traveling opposition, the Boston Whirlwinds.

The Whirlwinds would play two quarters and then be clowns for the second half of the game to the Globetrotters’ antics. Francis did not like the gig and opted out after the two-year deal was completed.

Although he was taken in the third round of the 1956 draft by the NBA champion Philadelphia Warriors, Francis turned down the offer and went home to eastern Ohio to work in a steel mill for 20 years. The plant closed six months shy of Francis getting his pension.

Now retired in Highlandtown, Ohio, Francis and his wife live in a seven-room brick home they bought in 1954 for $9,500. Francis had a bout with prostate cancer, but he is recovering and still attends the Bevo Francis Classic held each year at his former college.

Oliver is retired and lives in Springfield and usually makes the trip to the Bevo Francis Classic.

Although Oliver and Francis left the school at the end of the 53-54 season, Rio Grande continued to win, albeit against a less glamorous schedule.

“It was an adjustment,” said Myers. “We were in vans and the schedule dropped down a notch or two. But Herman Bush was a good coach. We had three winning seasons. I have no regrets. We learned discipline and we have a lot of friendships that are still lasting.”

Smith hints he may cast Heisman vote for Barrett