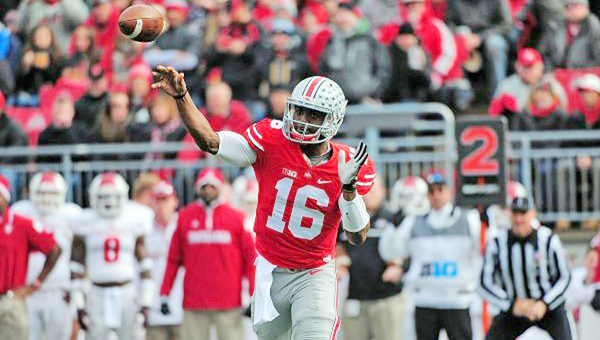 COLUMBUS(AP) — Forget the 5-6 record and the talk about Brady Hoke getting fired.

When Ohio State’s coaches and players look at Michigan, they see a dangerous powerhouse desperate because it’s cornered.

Buckeyes coach Urban Meyer was asked this week if he could tell Michigan had “issues.”

“No, because you watch videotape and the talent is there,” he said. “They’re going to give us everything they got — and what they’ve got is a lot.”

By almost every measure, this has been a forgettable year for the Wolverines, particularly on offense. They rank near the bottom in most major-college stats, including 111th in scoring (20.3 points a game), 113th in passing (163 yards) and 114th in total offense (330 yards).

The clincher is they have scored 11 or fewer points in four games this season.

But don’t try telling the seventh-ranked Buckeyes any of that.

Immersed in preparations for the showdown with the Wolverines on Saturday, the Buckeyes don’t believe what they’re watching on video from Michigan’s games earlier this season.

“They have a lot of talent, from the quarterback position to the receivers. They have talent all over the field,” Ohio State linebacker Curtis Grant said.

“It’s kind of hard to wonder what’s going on up there, like ‘How come they’re not winning more games?’ I just got done watching film. They have multiple running backs. They have good receivers. Any time this team wanted to explode, they could and just go crazy.”

It’s not surprising that the Buckeyes see something that others have not. They have a vivid recall of last year’s game, when quarterback Devin Gardner and Co. lit up the Buckeyes’ vaunted defense for 603 yards and 41 points — and still lost.

Michael Bennett, Ohio State’s senior defensive tackle, spent most of that game chasing Wolverines. Gardner completed 32 of 45 passes for a gaudy 451 yards and four touchdowns and rushed for another score.

Laughing, he added, “They actually wanted to win the game — and that was annoying.”

Hoke, for his part, doesn’t think success one year means much in the next meeting.

“I do not (believe in) the carry-over from year to year,” he said. “They are two different teams. There are different individuals on the teams; there are different leaderships and attitudes on the teams. Every team is different. What happened last year was a group of (Michigan) guys went out, played awfully hard together and executed and made some plays when they had to.”

Michigan (5-6, 3-4 Big Ten) needs a win just to go to a bowl game — not to mention how a big upset could affect Hoke’s job security.

The Buckeyes (10-1, 7-0, No. 6 CFP) have already punched a ticket for the Big Ten title game a week later. And they remain in the hunt for one of those four coveted spots in the first playoffs.

They’re going over every second of video, knowing that a loss — particularly one to their archrival — would destroy a lot of their goals and dreams.

“I’m pretty confident just because we don’t want to have what happened last year happen again,” linebacker Joshua Perry said. “We’re going to prepare really well for this game. Guys are going to take it really seriously. We know what’s at stake.”

The Buckeyes have already secured a spot in the Big Ten title, but loss would cost the Buckeyes a shot at being in the College Football Playoff. The Wolverines are trying to salvage a dreary year and get bowl eligible. Maybe that could save coach Brady Hoke’s job. Probably not.

Michigan QB Devin Gardner against Ohio State’s secondary. A year ago, Gardner passed for 451 yards and four TDs and ran for a score. It was the start of a defense tailspin for the Buckeyes, hired a new defensive coordinator to shore up the secondary (Chris Ash).

Michigan: DE Brennen Beyer and MLB Jake Ryan lead a defense which has held six opposing teams to under 100 yards rushing this year. WR Devin Funchess has caught at least one pass in his last 24 games.

Ohio St.: QB J.T. Barrett, a star so far with a school-record 33 TD passes and 3,507 total yards, will be playing in the most pressure-packed game the freshman has seen. DE Joey Bosa leads the Big Ten in tackles for loss (18) and sacks (11.5).

It’s a statistic that has been lost in Michigan’s stumbles this year, but the defense is among the best in the Big Ten. The Wolverines allow just 2.94 yards per rush, seventh best in the nation. … Streaking: Ohio State has won its last nine games, and 23 consecutive Big Ten regular-season games. … The Buckeyes can become the first Big Ten team to win every game in conference play three years in a row. … Hoke is 31-19 in his fourth season, but his record has gone from 11-2 in 2011 to 8-5, 7-6 and now 5-6. … QB Troy Smith, who won the 2006 Heisman Trophy, will be the eighth former Buckeye to have his number enshrined in lights during a halftime ceremony. … This is the 97th consecutive year the teams have met. … S Tyvis Powell intercepted Gardner’s two-point conversion pass with 32 seconds left in 2013 to preserve Ohio State’s 42-41 victory.