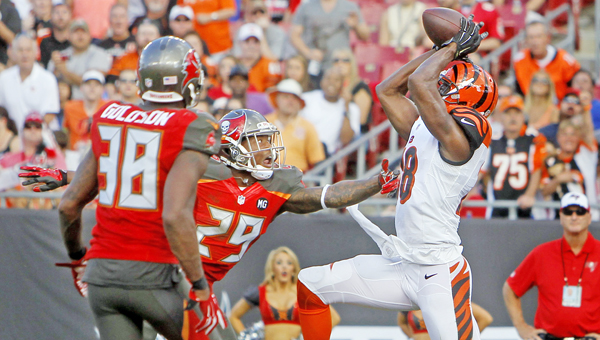 TAMPA, Fla. (AP) — Sloppy but victorious, Cincinnati extended its slender lead in the AFC North with help from a 12th man.

Andy Dalton shrugged off flu-like symptoms to run for one touchdown and throw for another Sunday as the first-place Bengals overcame his mistakes and others in a 14-13 victory over the struggling Tampa Bay Buccaneers.

Dalton threw three first-half interceptions and Cincinnati (8-3-1) overcame 10 penalties and an ill-advised onside kick that helped Tampa Bay stay in the game to win on the road for the third consecutive week.

That’s a franchise first that seemed improbable following a lopsided home loss to Cleveland a month ago.

“We had, obviously, the turnovers offensively that led to scores, we had penalties on defense that kept drives alive, and those are things we overcame,” Lewis added. “They’re going to show up once in a while, but we seemed to have them all today. … We kind of got in our own way all day.”

As poorly as the Bengals played, though, Tampa Bay (2-10) committed the biggest blunder of the day — a penalty in the closing seconds for having too many men on the field. The infraction overturned a 21-yard pass completion that would have moved the Bucs into position for a possible game-winning field goal.

It was the last of 13 penalties called against them.

“That’s how 2-10 football teams play. They find a way to lose it in the end,” Tampa Bay coach Lovie Smith said. “When you make dumb, stupid penalties like that throughout the game, it will bite you at the end, which it did.”

The Bengals lead the tightest division race in the NFL, with a 1 1/2-game lead over each of their AFC North rivals. Baltimore, Pittsburgh and Cleveland all lost Sunday.

It looked as if Cincinnati might fall as well, when Josh McCown’s throw to Louis Murphy appeared to give the Bucs a first down at the Bengals 20 with 12 seconds remaining.

As Tampa Bay scrambled to line up and spike the ball, an animated Lewis came off the sideline and threw the red flag to challenge the previous play.

Officials initially announced the Bengals could not challenge, because coaches are not allowed to request any in the final two minutes. The replay official, however, had already decided to look at the play, and found the Bucs indeed lined up with 12 players.

“The guys upstairs were saying it right from the start, before they snapped the ball. … We were trying to match up the personnel and there was one too many,” Lewis said.

McCown said the Bucs had an extra tackle on the field. The quarterback didn’t notice, and neither did Smith.

“We were in a bit of a muddle-huddle there, and guys were on and off. … We’ve just got to handle it better,” McCown said.

The ball was moved back to the 41, where a 5-yard penalty was added and an additional 14 seconds were added to the clock. Tampa Bay turned the ball over on downs with a second left.

“It was a crazy drive, kind of stressful,” said Dalton, who said he became ill late Saturday and was up most of the night before the game. “For them to have 12 guys on the field, that’s not something you see all the time, but fortunately for us it happened.”

Dalton, who said he couldn’t recall a time when he felt as sick before a game as he did early Sunday, ran for a 5-yard TD in the second quarter. He threw 13 yards to A.J. Green to put the Bengals ahead 14-10 late in the third.

But just as the Bengals looked as if they were taking control, Cincinnati tried an onside kick that Tampa Bay’s Orie Lemon not only recovered, but returned to the Bengals 31.

An unnecessary roughness penalty for Brandon Thompson’s hit on McCown moved the ball to the 16, but Tampa Bay settled for Patrick Murray 42-yard field goal to pull within 14-13.

McCown completed 15 of 29 passes for 190 yards and one interception. He was sacked once.

Dalton finished 19 of 27 for 176 yards and was sacked twice. The Bengals rushed for 112 yards, with Giovani Bernard gaining 49 on 10 carries and Jeremy Hill adding 40 on 13 attempts.

“As the game went on, I started to feel better,” Dalton said. “I’m not going to make any excuses for the way things started out. It obviously isn’t something that you want to deal with, but I’m not saying that’s the reason things came out the way it did.”

NOTES: Johnthan Banks, Brandon Dixon and Alterraun Verner had Tampa Bay’s interceptions, but the Bucs were only able to turn them into three points — a first-quarter field goal after Banks returned Dalton’s first pass of the game 32 yards to Cincinnati 9. … The Bengals snapped a six-game losing streak in a series Tampa Bay leads 7-4. It was their first win over the Bucs since a 56-23 rout at home in 1989. … Tampa Bay RB Doug Martin led Tampa Bay with 58 yards rushing on 18 carries. The Bengals have allowed just over 71 per game on the ground the past three weeks.

COLUMBUS (AP) — An Ohio State football player who disappeared shortly after sending a text message about his concussions was... read more