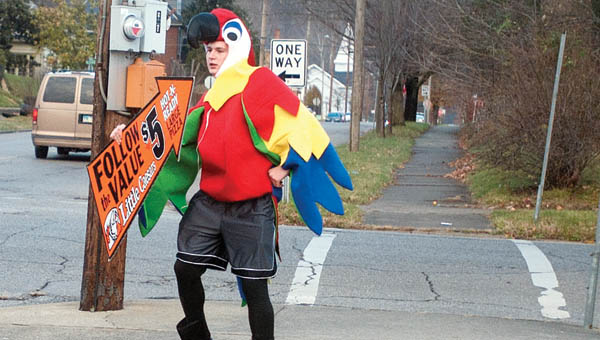 the tribune/brandon roberts
Sign dancer Austin Bell, 18, of Ironton, dances in front of Little Caesars on South Fourth Street in Ironton. Bell has become well known in the community for his dancing and store managers said there has been an increase in sales since he began working there three weeks ago.

In the past three weeks motorists may have noticed a new Little Caesars sign gyrating along South Fourth Street in downtown Ironton. Austin Bell has made sure everyone sees it.

Bell, 18, listens to classic country as he rides the Little Ceasars sign around the parking lot or uses it as a makeshift guitar. His moves aren’t choreographed, he said, he just “does whatever comes to mind.”

The ultimate goal of a sign dancer is getting people’s attention, particularly for the $5 “Hot-N-Ready” pizza emblazoned on the bright orange sign. Bell’s dancing, one manager said, has done just that.

“Business has definitely increased,” Cory Hanshaw, one of the store’s managers, said. “It’s exciting to see him out there and he does a very good job. He goes above and beyond and it shows.”

Customers inside the store and in the drive-thru often compliment Bell, sometimes crediting his dancing as their sole reason for eating at Little Caesars.

“A lot of people say they’ll be back because of him,” Hanshaw said.

Bell, a 2014 graduate of Ironton High School, studies criminal justice at Ashland Community and Technical College with the intention of becoming a cop. But for now, while working 4-7 p.m. four or five days a week, Bell said he’s going to do his sign-dancing job as well as he can.

“I get out there and do whatever it takes,” he said. “Believe it or not, when I was little I would see people out doing this and always said I’d do it one day. I never really thought I would, but here I am.”

Bell said he has been having a great time and has been a little surprised with the reception he has gotten from the community. He said to keep from getting cold he just keeps moving or uses gifts from his growing legion of fans.

“One day when it was cold a woman pulled up and gave me some HotHands,” Bell said. “Another lady just handed me $10, which was incredibly nice.”

In addition to providing entertainment for the community, earning a paycheck and having fun, Bell said the overall benefit of his getting noticed is how it helps everyone with whom he works.

“The store managers told me they have seen an increase in business since I started,” he said, “so that’s always good.”

Over the coming days and weeks leading up to Christmas, several events aim to get Lawrence County residents in the... read more