Louisville gets past Buckeyes 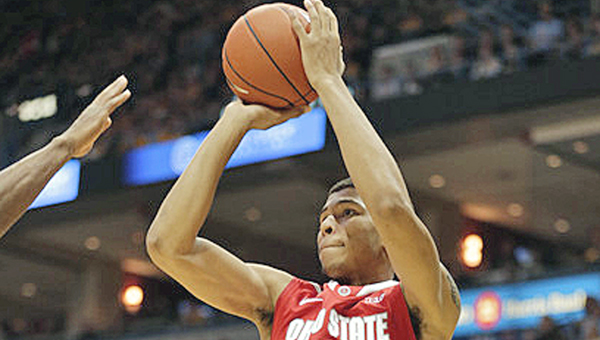 Ohio State Buckeyes’ Marc Loving hits a jumper for two of his 13 points. Loving helped an early second half rally but fouled out as the Buckeyes lost to Louisville 64-55 on Tuesday. (MCT Direct Photo)

Judging from the multiple ways he helped the No. 5 Cardinals escape No. 14 Ohio State, it didn’t seem to affect him that much.

Rozier made three clutch jumpers down the stretch, including a big 3-pointer with 46 seconds remaining, helping the Cardinals survive the Buckeyes 64-55 Tuesday night in the ACC/Big Ten Challenge.

“I just tried to do other things,” said Rozier, who re-aggravated the injury early in the second half and played the rest of the game with his pinkie and ring finger taped together. “I got seven rebounds tonight just trying to help the team in other areas.

“Then I stayed patient and my shot came late in the game so it was good that I got to knock down that shot.”

Rozier scored nine points in the final 3:49, and all were critical in keeping the Cardinals (6-0) from blowing their 17-point halftime lead. But his biggest basket provided a 59-53 lead, eliciting a huge cheer from 22,784 and a yell from the 6-foot-1 Rozier.

Anas Mahmoud and Montrezl Harrell each added a free throw before Rozier made a steal with 16 seconds left and hit a foul shot to finish with 11 points, 7 rebounds and 7 assists.

Not to mention, the admiration of Louisville coach Rick Pitino for pressing on.

“The finger is totally dislocated, it’s throbbing, you know it’s hurting, it’s the second time he did it and he took the big shot when we were up 3 to give us the lead,” Pitino said. “That’s a hell of a thing for a guy like that to do.”

Wayne Blackshear’s two free throws with five seconds left sealed Louisville’s win. He finished with 22 points including four 3-pointers and for a while appeared destined to be the Cardinals’ savior before Rozier came through.

“My teammates found me in open spots,” Blackshear said. “I was able to knock down shots and just be aggressive.”

D’Angelo Russell shook off four fouls to score 12 of his 17 points in the second half for Ohio State (5-1), which still had chances to win despite shooting 30 percent. But the Buckeyes missed a couple of opportunities in the final minute and committed fouls that the Cardinals converted.

“Every shot we took, there was never a bad shot,” Russell said. “We just couldn’t knock them down. I feel like if we would have knocked them down, we would have won by 20.”

Harrell had 13 points and 10 rebounds for Louisville, which shot just 35 percent.

Louisville led 35-18 at halftime but Ohio State didn’t flinch and scored six straight points to get within 37-24 early in the second half. Russell then warmed up to rally the Buckeyes, making four straight free throws to get his team within 56-53 with 1:12 left.

Rozier’s jumper made it a two-possession game and the Cardinals could breathe easier after that.

Ohio State associate head coach Dave Dickerson spoke after the game in place of coach Thad Matta, who was comforting forward Anthony Lee, who was told after the game his grandmother had died earlier in the day.

Tuesday night’s 9:30 tipoff figures to be the latest for both programs until tournament time, but for Louisville it marks the first of four games this season with 9 p.m. starts. In fact, the Cardinals face Indiana at 9 p.m. on Tuesday at the Jimmy V Classic in New York.

Louisville also has late starts next month in ACC play against Clemson and at Boston College. Ohio State has it somewhat easier, playing a late game at Minnesota on Jan. 6.

Ohio State: Shannon Scott had zero assists in 22 minutes after entering the game leading the nation with 10.4 per game.

Louisville: The Cardinals face their third and final Big Ten opponent with Indiana on Tuesday in New York.