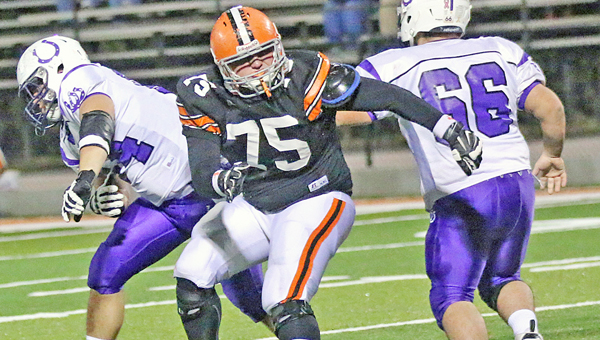 D’Angelo Palladino led the area in rushing and one of the main reasons was offensive tackle Isaac Sherman.

Their performances all season made it easy to understand their selections to the Associated Press Division V All-Ohio football team that was announced Wednesday.

Palladino was a first team choice and Sherman was named to the third team as they helped the Ironton Fighting Tigers to an 8-3 record and a berth in the playoffs as they advanced to the regional semifinals.

The Ironton duo was joined on the All-Ohio team by three teammates and 13 other area players.

Gunther was named to the third team offense while Austen Pleasants, Austin Ruggles and David Abrams were special mention.

In Division VII, the Symmes Valley Vikings’ Tyler Dement was named to the second team defense and Collin Webb was third team on defense.

The Vikings Tanner Mays and Cameron Meadows were special mention.

Sherman — a 6-4, 290-pound senior — is a three-year starter and played both offense and defense. He suffered a broken ankle in the playoff win over Martins Ferry and was severely missed in the regional semifinal game.

Cox was Ironton’s best athlete overall. The 6-1, 185-pound senior played quarterback and safety and joined Sherman as a two-time All-Ohio selection. He completed 32 of 62passes for 570 yards and two touchdowns and also ran 64 times for 365 yards and scored eight TDs.

McKnight is a 6-2, 260-pound senior defensive tackle who was double teamed on almost every play but still disrupted the opposition. Young is a 6-1, 214-pound junior linebacker who led the team in tackles. He also played fullback.

Meadows is a 6-5, 205-pound junior linebacker who had 129 tackles. He had three tackles for a loss, two pass breakups and a sack.

Smith is a 5-9, 150-pound senior defensive back who had 31 tackles, four interceptions and nine pass breakups.

A 5-9, 185-pound senior, Campbell was the Dragons’ best all-around player who made the team as all-purpose player.

McClaskey is a 6-foot, 170-pound senior linebacker and running back. He ran 70 times for 423 yards and three touchdowns.

Murnahan is a 5-11, 190-pound junior who had 109 tackles including nine for a loss. He had two interceptions and two fumble recoveries.

The 5-9, 160-pound Gunther led the Hornets in rushing with more than 1,000 yards. The senior running back is a three-year letterman.

The 6-8, 310-pound Pleasants has already given a verbal commitment to Ohio University. The senior lineman is a three-year starter.

A 5-10, 195-pound senior, Abrams played guard and defensive end for the Hornets and was a two-year starter.

Ruggles — one of the area’s fastest players — is a 5-10, 175-pound senior who played linebacker and also played running back.

Dement is a 6-foot, 205-pound junior linebacker who led the Vikings with 131 tackles, 15 tackles for a loss, five forced fumbles and two sacks.

The 5-11, 165-pound Webb was the team’s best defensive back and also played running back.

Mays is a 5-11, 200-pound senior running back who ran 85 times for 559 yards and seven touchdowns to lead the Vikings. He also played defensive back as he helped the team to a postseason playoff berth.

Meadows is a 5-11, 200-pound junior who was the Vikings’ best defensive lineman and also played tight end.