‘Just a Closer Walk with Thee’ 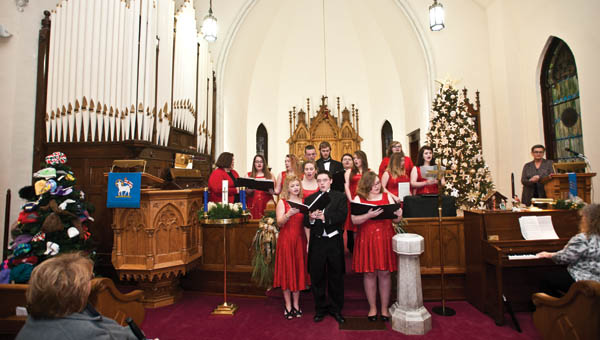 The 2014 Candlelight Christmas Tour of historical churches on Saturday allowed for people to see some of the oldest and more ornate buildings in Lawrence County.

“I have never been in any of these before,” Jessica Hankins, who lives in Ironton and was participating in the tour for the first time, said. “I really like it. It’s different. I’ve lived in Ironton my whole life and I drive by most of these churches every day, but I’ve never been in them until now.”

The tour, sponsored by the Lawrence County Historical Society in cooperation with the churches, began at the First Baptist Church on Fifth and Vernon streets.

“We have been serving this community for 200 years and celebrated our anniversary in July,” Eric Barnes, pastor of First Baptist, said. “We started out in a little building on Storms Creek.”

Barnes gave details of the church’s history, such as it was originally known as Storms Creek Baptist Church and the church bell arrived by steamboat in 1854. But, Barnes said, the crux of the church has remained the same for most of its 200-year history.

“Nearly two centuries ago we started raising money for missions,” Barnes said, “and that still is who we are today. We have a lot of outreach for children and youth and try to do as many things as we can.”

After the tour stopped at Christ Episcopal Church on Fifth Street and Park Avenue before going to the First Methodist Church on Fifth and Center streets where pastor Wayne Young greeted the group.

“I’m glad you all could come out,” he said. “There are so many beautiful churches in Ironton, especially this time of year.”

Young discussed the purple adornments around the church and explained it was because of the Advent, which is the first season of the Christian church year, leading up to Christmas and including the four preceding Sundays.

Young said the First Methodist Church was the first public building in Ironton to be surrounded by concrete sidewalks and, because of its size, was for a time used as a venue for public events such as graduations.

After visiting the First Presbyterian Church of Ironton on Fifth and Railroad Streets the tour stopped at St. Paul Lutheran Church on Sixth and Center streets where the Rock Hill High School Show Choir under the direction of Rhonda Pemberton was singing Christmas songs.

“Most of you have been on the tour before and are aware of the history of the church,” Jane Whitworth, church council president, said. “So I would like to talk about our beautiful Christmas tree, which is decorated with Chrismons.”

Chrismons, or monograms of Christ, are special ornaments hung on Christmas trees and used in decorations that serve as a reminder of the true meaning of Christmas.

The tour takes place annually the first Saturday in December.

CHESAPEAKE — A Cincinnati man who was visiting family in Chesapeake was arrested Monday following an alleged assault of a... read more