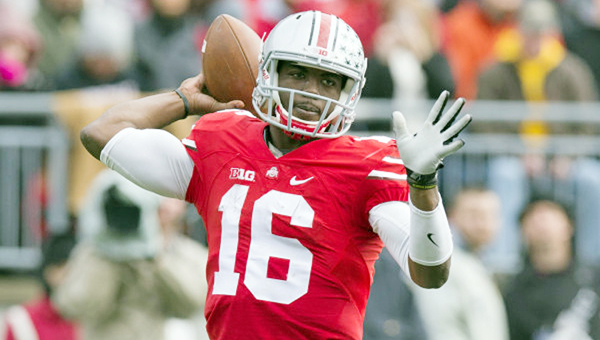 COLUMBUS (AP) — Injured Ohio State quarterback J.T. Barrett and his ex-girlfriend made 911 calls on Tuesday alleging each attacked the other.

Barrett and Alexandria Barrett-Clark were referred to prosecutors, according to a police report. It indicated there were no obvious signs of injury and both declined to file charges.

According to the report, Barrett said Barrett-Clark refused to leave his off-campus apartment in Columbus, Ohio, and struck him.

Barrett-Clark said he choked her and threw her across the room. On the 911 tape, she told the dispatcher she’s pregnant.

“(There is) no investigation. Both parties have the ability to file a charge against one another if they choose to at a later time through the prosecutor’s office,” Columbus Police spokesman Sgt. Rich Weiner said Wednesday in a text message to The Associated Press. “Both parties stated they did not want to file charges at the scene.”

Ohio has a policy of “preferred arrest,” which means an officer can make an arrest if there’s reasonable grounds to believe a crime has been committed, said Nancy Neylon, executive director of the Ohio Domestic Violence Network. Other states have mandatory arrest standards.

Barrett set Ohio State records for touchdown passes and total offense before breaking his ankle in the Buckeyes’ regular-season finale against Michigan. He is out for the Jan. 1 national semifinal against Alabama in the Sugar Bowl.

“We are aware there was an issue and we are gathering more information,” Emig said in an email.

COLUMBUS (AP) — Kam Williams has always been a scorer. From the crib to college he’s never been afraid to... read more