Santa gets his say 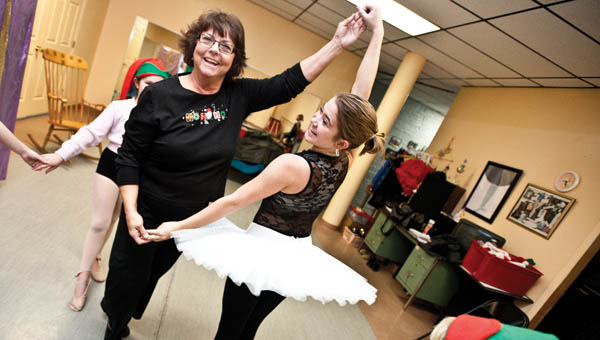 THE TRIBUNE/JESSICA ST JAMES
Yvonne DeKay dances with Rhiannon Stephens, the Sugar Plum Fairy, during rehearsal Wednesday evening for the upcoming production of “Santa’s Version of The Nutcracker.”

When the Sugar Plum Fairy starts to steal some of the glory from Santa Claus, the jolly man in the red suit wants to bring equilibrium back to the holidays. The result is this year’s Christmas ballet from the studio of Yvonne DeKay — “Santa’s Version of The Nutcracker.”

“Everybody does ‘The Nutcracker,” Yvonne said. “I wanted to do something different. I put a little twist in it, to look like a comedy.”

A request from the Sugar Plum Fairy to Mr. Claus and his elves to make pointe shoes and tutus goes unheeded.

“It puts to much stress on him,” she said. “So he goes to sleep and dreams of all the countries where he has to make deliveries.”

During the dream comes the original Nutcracker ballet with Tchaikovsky’s music paired with George Balanchine’s choreography.

As Santa sleeps, the dolls magically finish the ballet slippers and costumes.

“And that’s the magic of Christmas,” DeKay said.

This December Santa Claus will be portrayed by Chase McKenzie; Sugar Plum Fairy by Rhiannon Stephens and the Snow Queen by Lesley Phillips.

Performances are at 7 p.m. Saturday and 2 p.m. Sunday at Ironton High School. Tickets are $12 and can be purchased at the door.

Commissioners waiting for answer to request Unless there is a last-minute change of mind, the 2015 budget won’t be passed... read more