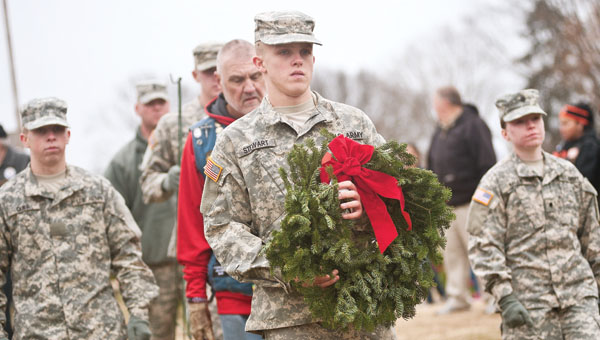 Members of the Ohio National Guard, out of Portsmouth, make their way to Lookout Point to place the final wreath during the ceremony.

Community honors those who served their country

Just as hundreds were laying wreaths on soldiers’ graves at Arlington National Cemetery at noon on Saturday, the Ironton community came together in the same way at Woodland Cemetery to mark another Wreaths Across America tribute.

This was the third year for the local event, the labor of love for its organizers, Juanita Southers and Linda Dalton, where fresh wreaths are placed on the graves at Woodland’s Soldiers Plot.

Hosting the ceremony was Leon Dalton, who asked the audience bundled up from the cold to have a minute of silence.

“This is for the fallen, the prisoners of war, the missing in action and those who are serving in this great country’s armed services,” Dalton said.

Then soldiers from Ohio National Guard in Portsmouth assisted by Boy Scout Troop 115 from South Point performed the raising of the flag ceremony. As bugler Tyler Payne played the Star Spangled Banner, veterans stood at attention saluting the flag.

“It is an honor to get to come to talk to the veterans — without these men and women, we wouldn’t be here,” Hatfield said. “These new soldiers here can see a community come together. No matter what armed service branch you served in, at one point you raised your hand and wrote a check to the United States, payable up to your life. That’s what makes this country what it is.”

Then Army veteran and Ironton attorney Craig Allen laid a wreath in honor of his branch of the military followed by Jeff Beasley for the Navy, Jim Riedel for the Marines, Ted Lewis for the Air Force, Jeff Dillow for the Coast Guard, Ted Riedel for the Merchant Marines and former POW Bill Washburn for the prisoners of war.

Before the wreaths were laid, Dalton concluded by saying “America has always been the first nation to stand up for the freedom of the world. Honor those who serve and teach our children the value of freedom.”

The wreaths will remain on the graves until Jan. 10.

An innocent victim or the mastermind behind a plot to rob a 76-year-old bookie of gambling money? That was for... read more