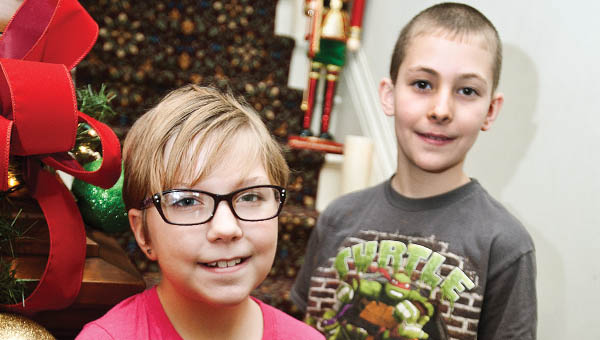 Budding historians were front and center at the Lawrence County Museum on Saturday as the historical society presented awards for its fourth annual essay contest.

This year 129 students from Lawrence County schools participated in the contest where fourth graders are asked to write about a figure or event in the county’s history. Members of the historical society judge the essays.

“We had some wonderful essays,” Kay Rader, of the historical society, told the students at a Saturday reception at the museum. “It was a process of elimination.”

Rader called the essay by Aleigha a charming story and praised Lakota for choosing the Rome Beauty apple.

“That is very important to our county,” she said. “The Rome Beauty apple is famous worldwide.”

Lakota chose that topic because her grandmother, Margaret Jones, worked at one time in the Rome Beauty orchard.

Rader was also pleased with Zach’s choice of the Waterloo Wonders. Zach got his inspiration for that essay from his mother, Stephanie Cade.

Each child received a cash award — $50 for first place, $25 for second place and $10 for third place — and a museum ornament.

The Haunting Mysteries Of Osa Wilson

For almost 100 years a statue in Woodland Cemetery has been the final resting place for Osa Drummond Wilson. Some people wonder if the legend of her death is fact or fiction. Her statue is very beautiful and tells a tragic story. So what really happened to Osa and how did she become known as the “Slapped Lady?”

Osa Drummond Wilson, a mother of six, was born in April 1877, in Gallia County. She was the daughter of James T. Drummond and Missouri Neal. She married Scott William Wilson on Sept. 12, 1894. Scott worked out of their home on First and Chestnut streets selling insurance and real estate. Today that stretch of land is vacant. Some seem to care less about the truth of her death and more about the legend that has grown around it. Some see proof of a brutal fight in a handprint on the left side of her cheek or marks on her throat that seem to come out of no where. Others say there are occurrences around that statue where her belly stays warm even in the coldest days of winter.

Legends say that Scott Wilson arrived home and a fight broke out. Scott slapped Osa across the face and caused her to fall down the stairs. On Jan. 26,1911, Osa became ill and went under the care of Dr. O.U. O’Neill, who treated her until her death about a month later on Feb. 25,1911. Her funeral was two days later at the Pine Street Methodist Church where she had attended regularly with the Rev. A.R. Henderson.

There have been no public accounts or no records of Scott ever being questioned in the death of his wife. Her death certificate lists the cause of death as neuritis with colitis, which means inflammation of a nerve accompanied by pain and loss of function. There is no evidence that can prove the case either way.

There is a visible difference in the cheeks on the statue of Osa Wilson, the left cheek is smooth and has a noticeable hand print. There have been many attempts to repair this, like sandblasting, but the handprint always returns.

Scott Wilson became ill and after about six weeks died on Nov. 6, 1929. The death certificate states that Scott died of septicemia, also known as blood poisoning. Now all that remains are a legend, mystery and a statue that may or may not tell a true story.

The Lawrence County apple orchards were a big part of our history.

The most popular apple is known as the Rome Beauty Apple. Joel Gillett moved to Rome Township in 1816. Lawrence County was not formed until 1817. Joel paid $1,100 for 100 acres and built a 2-story home on the river bank. Joel had already decided to have an orchard and brought nearly 200 fruit trees from Putnam Nursery in Marietta with him when he came to this area. The story is told that in 1817 Joel Gillet (also spelled “Gillett” or “Gillette” by his descendants) found a tree in that shipment that did not match the others; being a strong member of the Whip party he gave it to his son Alanson, saying, “Here’s a Democrat. You may have this one.”

His son planted the tree on the banks of the Ohio River, where several years later it was found producing large, red apples. His cousin, Horatio Nelson Gillet, took cuttings and started a nursery to promote the apple. Originally named the “Gillett’s Seedling,” it was renamed the “Rome Beauty” in 1832 in honor of the township in Proctorville. A sign in Proctorville welcomes you recognizing this beauty.

The original tree survived into the 1860s until it fell victim of erosion of the bank area and was washed away by the Ohio River.

The Waterloo Wonders were an incredible basketball team located in a small town in southern Ohio. They won two state championships between the years of 1934 and 1935. They won 58 straight games before they were beat. They won a total of 94 out of 98 games. The players were Curtis McMahon Beryl Drummond, Orlyn Roberts Wyman Roberts and Steward Wiseman. They were coached by Magellan Hairston. There were other players on the team but these were the five known as the Waterloo Wonders.

The team of five guys learned to play using a ball from rags. Because the ball did not bounce they learned to pass very well. They learned to shoot the ball by hanging a basket in a barn. They were so good they often beat teams of five when they only had three or four players on the floor. They beat many teams in their league and also many college teams. Four of the five Wonders went on to play professional basketball.

They made history and have a historic marker in Waterloo. Today, the school is gone but the legend of the Waterloo Wonders lives on.

COLUMBUS (AP) — Ohio back-to-school shoppers would get a three-day reprieve from Ohio’s sales tax under a bill headed to... read more