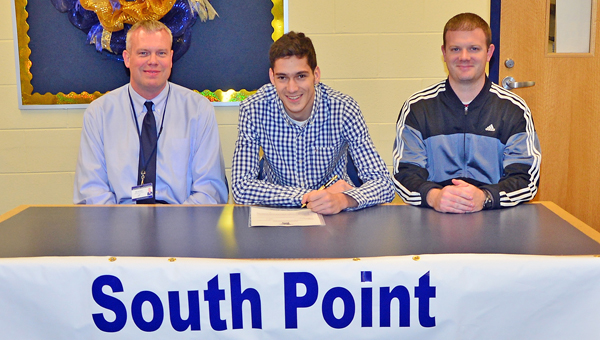 “As soon as he came, the first day before we began to practice he worked out and we knew he could play. It was a smooth transition,” said Joy.

It didn’t take the Shawnee State Bears’ coaching staff long to realize Krivan’s talent and led them to sign the Pointers’ standout to a letter-of-intent.

Bears’ coaches saw Krivan play on several occasions and he worked out with the team and turned in an impressive workout.

“I became more eager. To get a chance to play against other colleges is awesome. I hope to get more experience and get to play pro soccer,” said Krivan who is expected to play striker for the Shawnee State Bears.

The path to the United States began when Krivan was chosen by sponsor Bill Christian. He immediately began gathering information about his United States’ destination.

“He picked me and he offered me. I looked at maps and some things about Ohio,” said Krivan.

So how is America?

“It’s awesome,” said Krivan with a big smile. “I live here but I have to change. I feel at home here. I feel my future is here.”

Maps along with facts and figures can only do so much. Krivan said there were a lot of adjustments playing against American competition.

“Other teams were pretty good. The people here care and communicate more and they are more helpful,” said Krivan.

Krivan was a first team Division II all-district selection by the Southeast Soccer Coaches’ Association after helping lead the Pointers to a 16-2 record and a sectional title, the best season and most wins in school history.

Jim Walker jim.walker@irontontribune.com   Mom and dad, how about tickets to the Ironton Classic as a Christmas present? It’ll be... read more