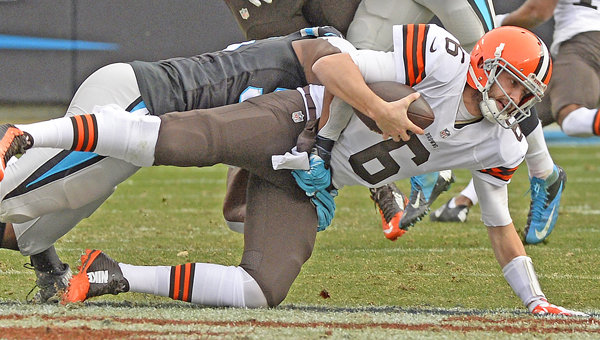 CHARLOTTE, N.C. (AP) — The Cleveland Browns are limping to the finish line.

The Browns (7-8) lost their fourth straight game Sunday, including their second in a row under rookie starter Johnny Manziel.

Manziel was a mere 3 of 8 for 32 yards passing and ran twice for 3 yards in the 17-13 defeat to the Carolina Panthers before leaving with a hamstring injury late in the first half.

Brian Hoyer wasn’t much better, finishing 7 of 13 for 134 yards, the bulk of that coming on an 81-yard touchdown pass to tight end Jordan Cameron. He threw one interception and was sacked three times.

The Browns had just 228 yards on offense and eight first downs.

“Offensively, not near good enough to win in this league,” Browns coach Mike Pettine said. “We made the one big play, but other than that we never really seemed to get in much of a rhythm.”

The Browns were officially eliminated from playoff contention Saturday when San Diego beat San Francisco. They’ve not been to the playoffs since 2002.

He was injured when he sprinted out to his left just before halftime. Linebacker Luke Kuechly and safety Colin Jones converged on Manziel, taking him to the ground for a 1-yard loss. Manziel attempted to get up, then fell back to the ground. He remained in his uniform but did not return.

Manziel said afterward he felt his hamstring tighten up earlier in the game.

“I kept walking more and I just felt like something that I hadn’t experienced before and felt like I needed to get checked out,” Manziel said.

Manziel said he left the game frustrated but determined to improve in the offseason.

“If anything it makes me hungrier to work in this offseason and get with these guys and stay on top of this stuff. and come back next year and come out and try to have some success early in the season and sustain that through a season,” Manziel said. “That’s obviously a long way from now. but just the way my mindset has flipped from being a guy that you never know when you are going to get a chance to go in and trying to stay on top of your stuff to being the guy for a couple weeks. … It hurts me and eats at me to not be out there with those guys.”

The Panthers (6-8-1) are talking playoffs even though they have fewer wins than the Browns (7-8).

The victory sets up a winner-take-all showdown next Sunday at Atlanta between the Panthers and Falcons for the division title. It also guarantees a team without even a .500 record will win the NFC South.

The winner will join the 2010 Seattle Seahawks as the only teams to reach the postseason in a non-strike-shortened season with a losing record.

“Now it all comes down to one game and that’s all we can ask for is to be in that situation,” Panthers coach Ron Rivera said.

Cam Newton threw for one touchdown and ran for another just 12 days after the quarterback suffered two fractures in his lower back following an automobile accident. Jonathan Stewart ran for 122 yards and caught a 9-yard touchdown pass from Newton.

The Panthers have now won three straight after going more than two months without a victory.

The Panthers led most of the game before Cameron got behind the secondary to give Cleveland its first lead of the game at 13-10 with about 10 minutes remaining.

But Newton, looking healthy and mobile in escaping from the pocket, drove the Panthers back downfield. He completed a 9-yard pass to Stewart, who slipped out of the backfield untouched and found an open pocket in the end zone.

“The effort was tremendous,” Rivera said of Newton. “It kind of speaks to who he is and his toughness.”

Newton called the last 12 days “tiring,” but said the whole ordeal has left him with an entirely different perspective on life.

“For me to come out of an accident like that, all praises go to God,” Newton said. “He is using me in a positive way and I’m using my influence in a positive way. I’m on a (pedestal), so when I do good things or bad things people are going to be affected. So I just want to use mine in a positive light to encourage the next person. That is what we are on this earth for — to make people better.”

NOTES: Panthers cornerback Josh Norman had an interception for Carolina, but then fumbled on the return when he held the ball with one hand and was hit from behind. … The Browns ran 46 plays to Carolina’s 77.

The Associated Press   The Pittsburgh Steelers and Green Bay Packers both qualified for the NFL playoffs with wins Sunday.... read more