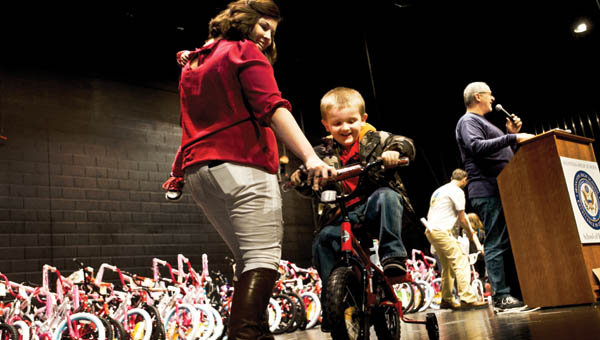 For the past three months co-organizers of the 4th annual Lawrence County Bicycle Giveaway, John Dickess, of Dickess Auto Repair, and Don Schwartz, of Advance Auto Parts, spent thousands of dollars and hundreds of hours working toward this year’s goal of giving away 350 bikes; 110 more than last year. It took only a few hours on Saturday to give them all away.

“We made it to 350 bikes,” said Dickess, as he maneuvered through the growing crowd at the Ironton High School Auditorium. “I gave some bikes to some organizations to give away so we have 345 to give away today.”

Sara Jenkins and her son, Makya, 4, and daughters, Carlie, 10, and Haylie, 8, were attending the giveaway for the first time.

“I called Dickess Auto Repair and asked how to sign up,” Sara said. “I did what they told me and here we are.”

Just before Terry Wagner of Tri-State Worship Center began his announcing duties, Dickess took the microphone and asked for 8-year-old Mackenzie Wilds to come on stage. He crouched next to Mackenzie and the crowd went silent.

“Mackenzie came to us last week and said she took her birthday money and bought two bikes to giveaway,” Dickess said. “I just thought she should be appreciated for that.”

The bikes Mackenzie purchased were given away by her to Justin and Heather Ackison.

“It’s amazing what John and Don have been able to pull off,” Wagner said. “They do an unbelievable job and the look on the children’s faces when they get a bike, that’s really why they do this.”

Although a majority of the bicycles are purchased through donations, Dickess and Schwartz organized a street fair in mid-October to raise money. Earlier this month, 20 students from Collins Career Center spent four hours assembling the bicycles.

Pizzas for the giveaway were donated by Giovanni’s in Ironton and Coal Grove and Papa John’s in Flatwoods, Kentucky. Two 22-inch flatscreen TVs — one donated by an individual and one by Rent-A-Center in Ironton — were given away prior to the bicycles.

The event also achieved a milestone.

“As best we can calculate this is the 1,000th bike we’ve given away,” Dickess said while pointing out a blue 26-inch Schwinn Point Beach. “This is going to someone in particular.”

Richard Diamond, a middle-aged autistic man, was given the 1,000th bike.