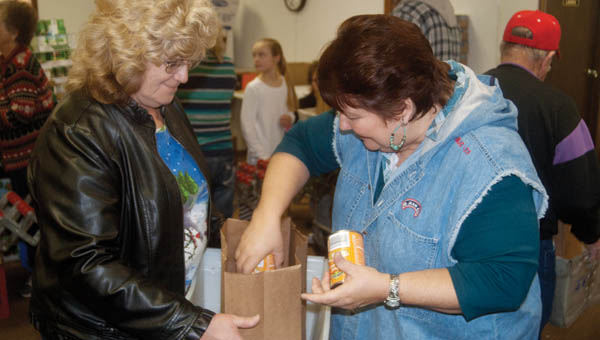 the tribune/michelle goodman
Mary Mongold, right, puts canned vegetables in a grocery bag Monday with about 80 other people who helped volunteer to fill food baskets for the Ironton City Mission Church.

The assembly line snaked through the halls of the City Mission Church on Monday, some people carrying paper grocery bags, others filling those bags with canned and boxed foods.

Everyone had a job to do to make sure the church’s more than six decades-long tradition of giving was successful.

“The mission has been doing this, best we can figure, for the past 65 years,” Jeff Cremeans, pastor of the City Mission Church, said.

It took each of the 80 volunteers more than three hours to build the 600 Christmas food baskets that had been signed up for over the past few weeks. Those families in need range in household size from one to upwards of 10, Cremeans said. In those 600 food baskets, volunteers packed canned vegetables and fruits, canned meats, dry beans, macaroni and cheese, cereal, crackers, peanut butter and jelly, a loaf of bread and a turkey.

“This used to be an all-day job,” Cremeans said, “and we didn’t even have this many baskets. “Now they make quick work of it.”

This year’s total food basket count was down from last year, but is about average overall, Cremeans said.

“We’re thankful for all those who have helped us with this project,” Cremeans said.

Bruce and Jamie Bacenhaster returned for their third year of volunteering for the project. They each carried food baskets from station to station as others filled them to the brim.

“I just feel like it’s a good ministry,” Bruce said.

Jamie said she enjoyed volunteering because she “loves people.”

On the other side of the room, Ralph Dingus stacked cases of mac and cheese and crackers before the individual boxes were packed in grocery bags.

“It is a pleasure to do this,” Dingus said, adding he has volunteered for many years.

“It’s fun putting stuff in bags,” he said. “And to help families, it feels good.”

There were also many first-timers who came out to help sort and pack food baskets.

Among them were siblings McKenna Dunham, 10, and Jalen Dunham, 6.

“I like it,” McKenna said of the work as she passed along some cans of green beans.

Jalen was hard at work putting canned meat into every bag that passed by.

The food baskets will be distributed today to those who registered. The mission’s offices will be closed the rest of the week for Christmas, but Cremeans said the shelter would still operate as normal.

“It’s just a blessing to be able to help so many people this time of year,” Cremeans said.

Sheriff questions low allocation in budget Over the objections of county auditor Jason Stephens, the county commissioners put a half... read more