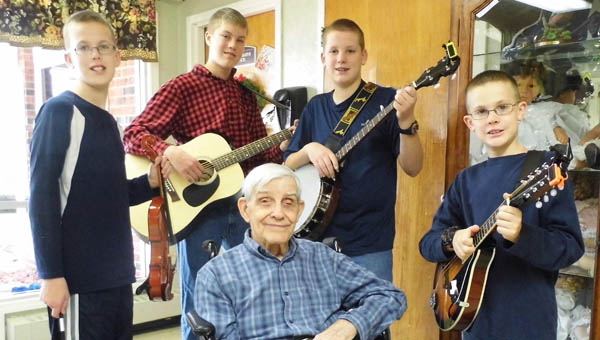 SOUTH POINT —River’s Bend Health Care, a skilled nursing and rehabilitation facility in South Point, hosted a performance this past Monday by The Roten boys of Barboursville

The groups self-described old time country and folk sound comes from brothers Braden, 14, on guitar, Joshua, 12, on banjo, Samuel, 10, on fiddle and Sutton, 9, on mandolin.

The Roten boys performed Christmas songs for their friend and neighbor, Roy Taylor, 88, who is a therapy patient at River’s Bend.

Caregivers brought Taylor into the lobby for a front row seat. Dozens of other residents, visitors and staff also gathered around to watch the young musicians perform their impromptu show. The audience sang along when the boys played “Silent Night.”

“I’m very glad they came here today,” Taylor said. “They are good neighbors. They look after me. They mow my grass and do yard work for me. I didn’t expect them to come here and play music for me.”

Leigh Anne Roten, the boys’ mother, said the family has been neighbors with Roy Taylor for nearly 15 years; just before Braden was born. She said the boys regularly play at their churches and nursing homes in the area. Her sons were eager to play for Taylor, she said, and they plan on returning several more times while he is recovering at River’s Bend.

“Roy is a World War II veteran of the U.S. Marine Corps and he is a wonderful person,” Leigh Ann said. “We’ve adopted him as part of our family.”

When the show was over, Taylor shook hands with the young musicians as applause filled the room. “This was a big surprise,” he said. “I really enjoyed it.”

Brenda Whitt, activities director at River’s Bend, said something stood out about The Roten Boys’ performance.

“We plan all kinds of entertainment for the holiday season, but this was very special,” she said. “These young men just showed up today with their instruments and played music in the lobby. It meant a lot to Mr. Taylor and all the other residents who saw the show.”

T-Wolves hold on to beat Ironton