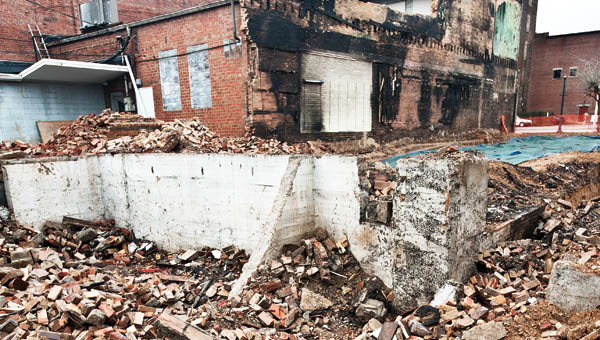 A back view of the former Glad Tidings building, located along South Third Street, in downtown Ironton. Crews have been working to clear debris after the building was damaged by fire in November.

What will become of the space in downtown Ironton where the former Glad Tidings building was located has not yet been determined.

The building was destroyed by fire on Nov. 15.

“I haven’t talked to the owners about what they plan to do,” Rich Blankenship, Ironton mayor, said. “The company that did the demo is finishing the cleanup process now. To tell you the truth, we need parking downtown, but I don’t know what will become of that space.”

After the fire the building’s walls became unstable and part of Third Street was temporarily closed.

The building is owned by James Staley.

Fruth Pharmacy’s downtown location, in a neighboring building, has been closed indefinitely because of damages sustained from the fire. Lynne Fruth, president of Fruth Pharmacy Inc., said the store suffered considerable water and electrical damage and has lost all Internet capability and re-opening is not definite.

“We will have to assess the amount of repairs needed and see if there is any damage that will keep us from moving back in there,” she said. “It’s important that everyone knows there are no controlled substances in that store.”

Buyers sought to recover back taxes SOUTH POINT — The six parcels that make up what was once the Biomass... read more