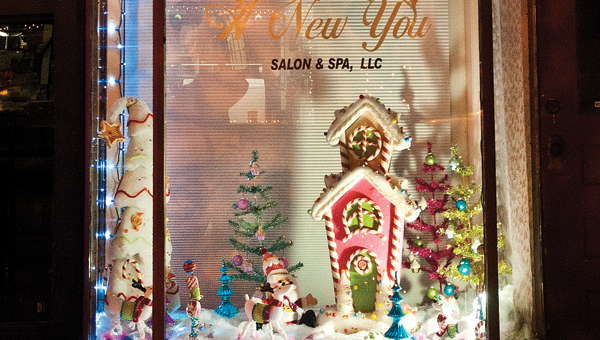 New You Salon and Spa at 113 S. Third St., won the people’s choice award for the Ironton In Bloom Christmas window display.

For the second time, New You Salon and Spa at 113 S. Third St., has taken the people’s choice award for the Ironton In Bloom Christmas window display.

New You won the first year IIB had the contest that is open only to businesses.

This time 300 people participated in the vote with runners-up being Dick’s Music and Unger’s Shoes, which won last year.

IIB started the contest three Decembers ago to inspire merchants to create seasonal window displays to add to the shopping experience.

Rachel Russell and Lorrie Kingrey, co-owners of New You, decorated the two picture windows of their salon.

“We have Candyland on one side and a Christmas tree in black, silver and red on the other,” Russell said. “We just wanted to do something different this year than was done in the past.”

The two women created the double scenes in just a day.

“I think this is a wonderful thing,” Russell said. “I wish we could get more businesses involved.”

Participating by businesses is growing each December, Allen said, including those not able to participate in the contest, but added a holiday air to their venue.

“They are responding very well,” she said. “We had an auto parts store on Park Avenue that had gotten a Girl Scout Troop to decorate outside because they are a chain and cannot decorate their windows.”

The design featured a snowman made out of tires.

“It looked real cute,” Allen said. “And Peddler’s looked really good, inside and out. It is fun to see how many storefronts do something to make our towns more attractive for shopping.”

Each year the Ohio Leadership Advisory Council (OLAC) recognizes a school district for its accomplishments and support through the use... read more