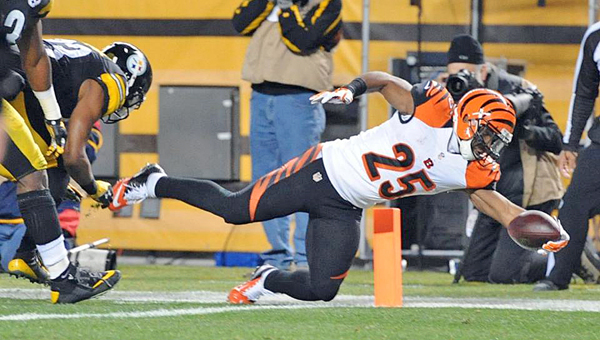 Cincinnati Bengals’ running back Giovani Bernard (25) dives into the into end zone to score a first quarter touchdown on a 17-yard pass play. The Bengals lost to the Pittsburgh Steelers 27-17 on Sunday and lost the division title. (Courtesy of the Cincinnati Bengals.com)

PITTSBURGH (AP) — Ben Roethlisberger spoke quietly while teammates raucously pulled on AFC North champion T-shirts around him. The Pittsburgh quarterback has been here before.

“Hopefully, the journey is not over,” Roethlisberger said. “I’m not going to talk about journeys and where we are. We’re still going.”

The Steelers reclaimed a spot the franchise has considered practically a birthright this millennium with a 27-17 victory over Cincinnati on Sunday night. They turned away a late charge on Antwon Blake’s timely strip of Bengals wide receiver A.J. Green and Antonio Brown’s ensuing 63-yard catch and run for the clinching score.

Pittsburgh (11-5) earned its first division title since 2010 and sixth since 2000 by sweeping the season series from the Bengals (10-5-1). The Steelers are the No. 3 seed in the AFC and will host Baltimore in the wild-card round Saturday night. Pittsburgh split two games with the Ravens this season, each time winning at home.

The Bengals are the No. 5 seed and will play at AFC South champion Indianapolis on Sunday. Cincinnati lost to the Colts 27-0 on Oct. 19.

The victory might prove costly. Steelers running back Le’Veon Bell hyperextended his right knee in the third quarter when Cincinnati safety Reggie Nelson hit Bell low at the end of a 19-yard reception. Nelson and Pittsburgh coach Mike Tomlin exchanged words during the postgame handshake, though both declined to get into details about the conversation.

Bell — voted the club’s Most Valuable Player by his teammates last week — lay on the field for several minutes.

He gingerly jogged to the sideline before being taken to the locker room to chants of “MVP! MVP!” Bell set a franchise record for total offense this season and has been one of the catalysts for Pittsburgh’s postseason return after a two-year absence. If he can’t play next week against the Ravens, Pittsburgh will be forced to rely on rookies Josh Harris and Dri Archer, who began the day with 50 yards rushing combined.

The Bengals had a chance to defend their division crown and earn the home game that comes along with it but couldn’t overcome three turnovers, the last the fumble by the typically sure handed Green. The four-time Pro Bowler was dealing with concussion-like symptoms following the play, which ended with Green taking a punishing hit from Pittsburgh safety Mike Mitchell just after the ball squirted free.

“We had a rough day,” Cincinnati coach Marvin Lewis said. “It’s key to take care of the football. We didn’t do a very good job of it.”

The Bengals didn’t exactly do a good job of covering Brown, but then again they’re hardly alone. Brown finished with 212 all-purpose yards, including a 71-yard punt return for a score in the first quarter. His sprint down the right sideline following Green’s fumble was Brown’s 129th and final reception of the season, the second-highest single-season total in NFL history.

“Who else was going to make (the play)?” Tomlin said. “He needs no endorsement from me. He is who he is. I don’t think any of us are surprised when he delivers for us time and again.”

Brown caught seven passes for 128 yards and a score. Roethlisberger fought off flu-like symptoms that forced him to miss the pregame warmups to complete 24 of 38 for 317 yards and two touchdowns to go with an interception.

The Bengals are heading to the playoffs for a fourth straight year for the first time in franchise history. They’re still looking for their first postseason win during that run, and now will have to do it on the road. Andy Dalton hit 27 of 38 passes for 244 yards and two touchdowns but also tossed two picks, both of them poor overthrows of Green.

“I think we had a chance in the fourth quarter,” Dalton said. “We weren’t able to get it done.”

It’s an issue that has plagued Cincinnati during its run of modest success. The Bengals are no longer laughingstocks. They also are still searching for their first playoff win since 1990.

That’s not a problem in Pittsburgh. The Steelers have three Super Bowl appearances in the last decade alone. They have surged since a 3-3 start, finishing with an 8-2 kick behind Roethlisberger, Brown and Bell. With the status of one of its Big Three uncertain, Pittsburgh must look for a new way forward.

Pettine praises team despite loss to Ravens in finale

BALTIMORE (AP) — The Cleveland Browns put forth quite an effort against a team headed to the playoffs. The last... read more