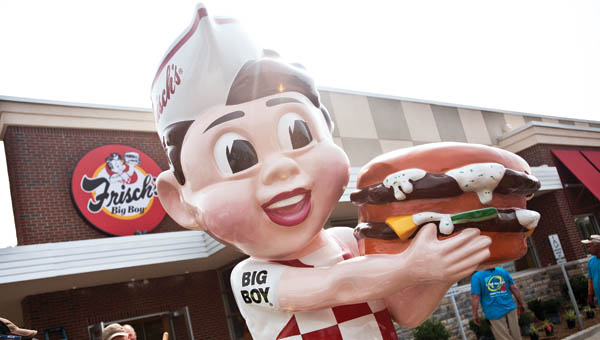 It was a year of economic milestones for Lawrence County, running the gamut from creating a new mode to transport product to boosts to the local hospitality industry bringing in the potential of a healthier employment base for next year.

At the same time, the year also saw heartbreaking tragedies as individuals faced death too soon or in inexplicable ways. Yet even those events brought out a sense of compassion in the community and a desire to effect change.

As the New Year approaches, it is a tradition at The Tribune to pick the top 10 stories of the soon-to-be old year. Here is our list for 2014:

The long-awaited comeback of a once iconic eatery and long-dreamed about hotel happened this summer in Ironton. Record crowds jammed the Frisch’s Big Boy on its first day, many there to see if the famous sandwich platters were as good as the ones served up when the restaurant was on South Second Street. To see the parking lot filled to capacity week after week, the answer was apparently in the affirmative.

About a month later the Holiday Inn Express and Suites became part of Ironton’s landscape, ready for the top tourist days in the city from the Gus Macker tournament to the Memorial Day weekend to Rally on the River.

Both are part of Phase I of the Gateway Project that started in 2009 when the Old Engineer Property LLC began acquiring acreage on Ninth Street from Vernon to Adams streets. Approximately two acres were transferred for construction of the hotel and restaurant.

What will the county do about its deteriorating jail? The immediate option to move it to the now-closed Ohio River Valley Juvenile Correctional Facility was originally the majority’s favorite short-term answer. That was an offer made by the state after the county jail failed numerous state inspections. In early summer, the county commission agreed to make the move. However as summer turned into fall into winter, the lack of funding has brought up the question of whether the move will ever happen. Proponents say it’s the only feasible solution, until a new jail can be built. However, opponents are vocal about moving the jail out of county, even if for only a few years.

Arming Rock Hill teachers brought cheers and jeers as district superintendent Wes Hairston announced that a number of his teachers had completed specialized tactical defense training and were certified for in-school armed response in the event of an active shooter.

The inspiration came from recent threats to schools in Ironton and Greenup, Kentucky. Teachers who received the training were not identified and would not have loaded guns. They would have access to the ammunition.

“There are going to be people opposed to it and that’s fine,” Hairston said at the time he announced the defense training at a media conference. “This is serious stuff and only a fool believes this can’t happen.”

The shooting threat against Ironton Elementary School was one of the catalysts for Hairston to institute the special training.

Indicted for the incident was Kyle Parramore, a 23-year-old Florida man, who is facing felony charges of third-degree making terroristic threats and second-degree inducing panic.

Parramore allegedly communicated a shooting threat against Ironton Elementary School on Sept. 12 via an anonymous Internet forum. That forced administrators to close the building for the day with a countywide lockdown to follow.

Agents from the Federal Bureau of Investigation and University of South Florida police arrested Parramore at the university campus where the man was a maintenance worker. After his extradition, he entered a plea of not guilty and waived his right to a speedy trial.

Economic development got a massive boost with the opening of The Port of South Point, a four-year-long project to create an intermodal port at the South Point industrial park in August.

The mission of the multimillion dollar port is to turn Lawrence County into an international player, allowing cargo from rail or truck to be transported via barge down the Ohio River.

The port is the only one of its kind from Pittsburgh to Indiana, plus, a public port allows any manufacturer to utilize it. The eastern end of the county also got a boost when a Proctorville-born developer brought a $13.5 million project to Rome Township.

In June, Wyngate at RiversEdge senior living community gave its first open house. Of the 87 units, 28 are for independent living and 59 for assisted living.

A husband-and-wife team that duped homeowners for hundreds of thousands in construction scams had their day in court with one getting probation and the other possibly going to prison.

Carol Richard, co-owner of All Seasons, was sentenced to four years’ probation and ordered to pay back $143,426 in restitution. Her husband, Patrick Richard, is expected to be sentenced on Jan. 7.

The couple was indicted in 2013 on more than 100 criminal acts focusing on home repair work that they either did not do or did not complete.

Ironton Police Department and the Ohio Attorney General teamed up in the investigation, whose records allegedly showed the owners made personal car and yacht club payments from the company’s bank account.

Fires in 2014 destroyed a onetime Ironton business and took the life of a Rome Township couple, which prompted their daughter to join a fight for public safety.

In November an evening fire broke out at an abandoned downtown building that once housed the Glad Tidings bookstore on Third Street, gutting the building and leaving it unstable. For about a week the street was cordoned off because of the precarious state of the structure. In the summer Leo and Betty Sayre died when their Rome Township home caught on fire during the Fourth of July weekend, allegedly from illegal high-powered fireworks that landed on the house.

Trisha Holsinger, their daughter, went to the Statehouse to join a fight against a bill that would make those kind of fireworks legal to sell and set off in the state. Before the General Assembly went on its Christmas recess, the House voted down that bill.

An internal dispute among members of the county’s budget commission pulled the state’s attorney general into the fight.

County auditor Jason Stephens opposed his fellow budget commission’s decision to move $500,000 from the 2015 carryover to the general fund.

Stephens vowed he would not allow it to be spent, if the commission tried, saying he is the final word on determining how much revenue is coming into the county each year.

An opinion from Attorney General Mike DeWine on Stephens’ authority was sought.

Three teenagers tragically lost their lives bringing out friends and classmates to candlelight vigils to remember them. Just before Thanksgiving Jacob Damron, 17, and his girlfriend, Sara Thoman, also 17, were killed in a two-vehicle accident on U.S. 52. Both teens were students at South Point High School.

Then a few days later Allison Eastham, 15, died suddenly following her hospitalization on Thanksgiving Day with the flu and double pneumonia. Again, her classmates paid tribute to her in a vigil following the Ironton Christmas parade. Eastham was an Ironton High School student and member of the Million Dollar Band.

King’s Daughters Medical Center agreed to pay the government almost $41 million to settle claims that it profited to the tune of millions by falsely billing Medicaid and Medicare for heart procedures that were not medically required.

The lawsuit had charged that the Ashland-based hospital “knew, deliberately ignored or recklessly disregarded” the fact that heart catheritzations and stents were performed that were not needed. The hospital said the payment was not an admission of wrongdoing.

What will you do in New Year?

When the clock strikes midnight tonight and the ball falls in New York’s Times Square, some of us will be... read more