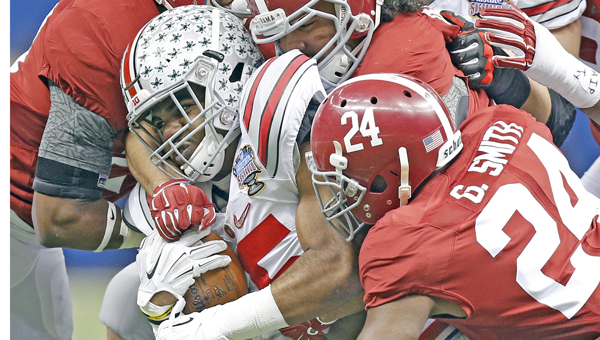 NEW ORLEANS (AP) — Urban Meyer had barely sat down after the Sugar Bowl when someone told him the score from the other semifinal game.

He started to bolt from his chair, feigning a sense of urgency with another game left against a team that wiped out the defending national champion.

“We’ve got to go get ready for that one,” Meyer said.

Actually, he’s not intimidated in the least. Meyer knows he’s got a pretty good team, too.

Cardale Jones turned in another savvy performance in his second college start and Ezekiel Elliott ran for a Sugar Bowl-record 230 yards Thursday night, leading Ohio State to a 42-35 upset of top-ranked Alabama in the second semifinal of the College Football Playoff.

The Buckeyes (13-1 and seeded fourth in the playoff) kicked off at the Superdome right after Oregon finished its 59-20 rout of reigning champ Florida State in the Rose Bowl.

Now, it’s on to the Jan. 12 championship game at Arlington, Texas.

Denied a shot at his fourth national title in six years, Alabama coach Nick Saban has no doubt that Ohio State can hang with the high-scoring Ducks.

“They’re capable of playing with any team in the country,” he said.

“We’re good enough,” he said. “That was a sledgehammer game. That was a classic.”

This is what Meyer had in mind when he took over at Ohio State in 2012, having taken a year off from coaching after leading Florida to a pair of national titles. Coming from the Southeastern Conference, Meyer knew what he had to do. Recruit more speed. Bring a more athletic style to the plodding Big Ten. Turn Columbus into the SEC North.

After just three years on the job, he’s one win away from a national championship. And, for the first time in nine years, the SEC won’t be part of the championship game.

“Maybe the Big Ten is not that bad,” said Meyer, whose team rallied from a 21-6 deficit. “Maybe it’s pretty damn good.”

Jones threw for 243 yards, including a 47-yard touchdown to Devin Smith that put the Buckeyes ahead for good early in the third quarter. He also ran for 43 yards and converted a crucial third-down play with a spinning, 1-yard dive and Ohio State clinging to a 34-28 lead.

On the next play, Elliott took a handoff, broke one feeble attempt at a tackle, and was gone for an 85-yard touchdown that essentially clinched the victory with 3:24 remaining.

Ohio State snapped an 0-for-10 futility against the SEC in bowl games, its only victory vacated by a scandal that cost former coach Jim Tressel his job.

Blake Sims threw a 6-yard touchdown pass to Amari Cooper with 1:59 remaining. The Buckeyes recovered the onside kick, but Alabama got it back one more time after some questionable clock management.

The Tide’s final shot ended when a desperation heave into the end zone was picked off by Tyvis Powell as time ran out, Sims’ third interception of the game.

“I feel like I’m going to Disney World,” a giddy Powell said.

Not yet. The next stop is Jerry’s World in Arlington.

Or maybe Cardale’s World would be more appropriate.

Jones started fall practice as Ohio State’s third-string quarterback, moved up the depth chart when star Braxton Miller sustained a season-ending shoulder injury, and became the starter for the Big Ten championship game after J.T. Barrett went down with an injury.

A 59-0 rout of Wisconsin showed that Jones was up to the job. His performance against Alabama gives him a chance to go down as one of the greatest replacement players in college football history.

Alabama hardly looked like Saban’s usual defensive powerhouse, giving up 537 yards to the Buckeyes. Elliott scored on a 3-yard run with 2:55 left in first half to spark the comeback, and he wound up averaging a staggering 11.5 yards on 20 carries to earn the award as the most outstanding offensive player.

“He’s probably the most underrated back in the United States,” Meyer said.

For the second year in a row, Alabama’s season ended at the Sugar Bowl.

This one was especially painful, costing the Tide a chance to advance in college football’s first playoff.

“I’m proud of this team,” Saban said. “They excelled all year long and kept Alabama at the forefront of college football.”

But he never liked the feel of the game, even after Alabama raced to its early lead, taking advantage of a pair of turnovers and coming up with a pair of red-zone stops.

“We really weren’t stopping them,” Saban said. “We did not control the football game like we usually do.”

Shaking off an interception, Jones led one of the biggest drives of the game at the end of the first half. He completed three straight passes for 37 yards, then broke off a 27-yard run up the middle when his receivers were covered. After a timeout with 19 seconds remaining, Ohio State pulled out a trick play — and Michael Thomas pulled off one of the most spectacular catches of the season.

Jones handed off to receiver Jalin Marshall on an apparent end-around, Marshall flipped it to Evan Spencer coming the other way, and Spencer suddenly pulled up and threw toward Thomas. He leaped up to make a twisting catch and somehow got his left foot down just inside the line for a 13-yard score that gave the Buckeyes all the momentum going into halftime.

Ohio State kept right on going, scoring two more touchdowns to complete a stunning 28-0 spurt that pushed the Buckeyes ahead 34-21.