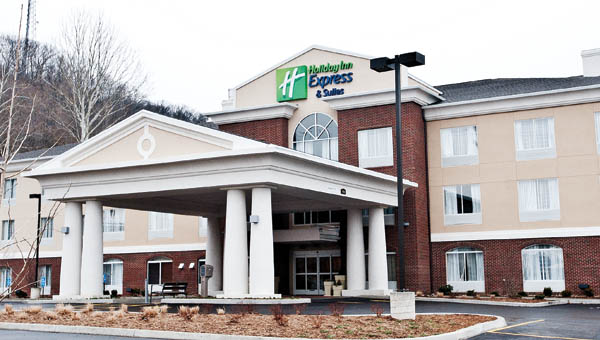 Holiday Inn Express and Suites is part of phase I of the Gateway project on Ninth Street in Ironton.

As Lawrence County progresses, so does city of Ironton

Much of last year’s growth and expansion in Lawrence County took place in Ironton. Restaurants and hotels opened, improvements were made to infrastructure and dilapidated houses and structures were demolished.

“Overall I feel positive progress has been made with higher hopes in 2015,” said Rich Blankenship, Ironton mayor. “None of this could be possible without the help of city council, our employees, civic organizations and the citizens of Ironton.”

The opening of Frisch’s Big Boy and the Holiday Inn Express and Suites as phase 1 of the Gateway Project on Ninth Street is indicative of the progress made in Ironton.

“The city has invested a lot in these projects by replacing the old water lines in the area to supply water for these and future developments,” Blankenship said. “We have also repaved and put new concrete in this area. This project has been a goal of mine since I was elected mayor.”

“This project was expensive and difficult, but also is required by the EPA,” Blankenship said. “ We continue working on future phases for the South end and downtown.”

Final paving is scheduled for completion this year. The entire project must be completed by 2023.

City council voted unanimously in January to allocate $10,000 to start a task force to combat the city’s growing and rampant drug problem.

“It’s been very successful,” said captain Joe Ross, detective for the IPD, said. “We worked with the Lawrence County Drug Task Force on a couple of big drug busts and it’s doing what it was intended to do.”

The Drug Intervention Team is an interdepartmental extension of the IPD’s Special Response Team (SRT) and is comprised of current officers.

The drug problem in Ironton is gigantic, as everyone knows,” Ross said. “We spent the $10,000 on equipment, which we needed and it was very helpful.”

New businesses such as Ergon, Bulk Liquid Transport and the expansion of Swift Manufacturing steel and fabrication in the industrial park have created jobs and The Depot restaurant added an option for downtown dining.

Ergon Inc., a Jackson, Mississippi-based diversified petroleum company, purchased seven parcels of land in Ironton to use as a petroleum storage facility.

The first three parcels, commonly referred to as the “tank farm,” were purchased this past September for $1.1 million from Keystone Industries LLC. The other four parcels were purchased in October for $5.92 million.

Bulk Liquid Transport is a West Virginia-based environmental cleanup business that began operating out of the former Wolohan Lumber building at 2940 S. Third St. in July.

With the business came the possibility of a minimum of 17 and a maximum of 40 jobs.

Activities took place in conjunction with the Farmers Market to draw crowds downtown.

Ironton In Bloom highlighted a vegetable the second Saturday of each month and the senior craft store in the Transit Center had a drawing for $100 Ironton Bucks. The Transit Café opened during market hours, there were musical performance from the likes of the Ironton High School Varsity Singers and others, and the Ohio University Southern Art Collaborative joined the market and offered activities for children such as spaghetti art.

Saving Abel, the Shane Runion Band, Day of the Sun and Bill Haley’s Comets were some of the concerts at the Ro-Na in 2014. The venue also hosted Game Day at the Ro-Na on college football Saturdays, which culminated with the Michigan vs. Ohio State game.

The city demolished several dilapidated houses in 2014 with the help of a $35,000 grant from the Ohio Attorney General’s office.

Blankenship said there is a prioritized list of structures and the cleanup effort will continue through 2015.

The city received a “no further action” letter from the EPA in regard the Ironton Iron property for future development.

Erin Strouse wrote that an investigation and remediation through the EPA’s Voluntary Action Program (VAP) caused the agency to issue a covenant not to sue and declare the “brownfield” ready for development.

Phase I of the Ohio Department of Natural Resources (ODNR) Natureworks Grant for the bicycle and walking trails was completed in April with phase II in the design process and construction set to begin in 2015.

The shared trail stretches from Second Street at Storms Creek to the old marina area. The original anticipated completion date of phase I was the end of 2013, but Blankenship requested, and was granted, an extension because of the seasonal closings of the asphalt plants.

A $630,000 grant will be used to construct a marina at the riverfront.

“A major part of the legwork and design of the riverfront marina has been completed,” Blankenship said. “Discussions with ODNR and Corps of Engineers are ongoing.”

Construction is set to begin in 2015.

Blankenship said he is waiting to hear from ODNR about being awarded a Cooperative Boating Grant to renovate the current boat ramp at the riverfront.

Other positive things in regard to the riverfront include demolition of the former Fuzzy Duck and working with the EPA on a “no further action” letter on the riverfront property that was remediated for future development.

The process for constructing a Veterans Memorial Park began at the site of the former Memorial Hall.

“We have completed the demolition phase and will be starting the next phase, which will be capping the remaining stone,” Blankenship said.

Memorial Hall was a monument to the Grand Army of the Republic and former city government building.

“Unfortunately, I only have 11 months remaining in my term and I hope to have some of these projects under construction and near completion by the end,” Blankenship said. “I look forward to a prosperous 2015 for our city.”