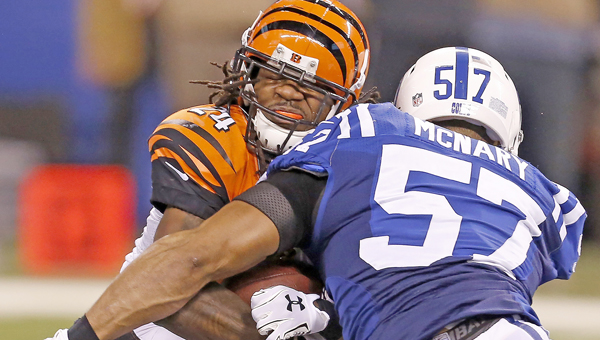 Cincinnati Bengals cornerback Adam Jones (24) is hammered by Indianapolis Colts outside linebacker Josh McNary (57) during second half action on Sunday. The Colts beat the Bengals 26-10 in the first round of the NFL playoffs. (MCT Direct Photos)

It happens to Andy Dalton and the Bengals every year, which is why that incredible streak is now 24 years and counting since Cincinnati’s most recent playoff win.

The Bengals made NFL history on Sunday when they lost an opening-round playoff game for the fourth year in a row.

Andrew Luck took apart their secondary, Dalton and the offense went nowhere in the second half, and the Bengals lost 26-10, extending their excruciating stretch of playoff futility.

“It’s kind of like missing a field goal that you feel you should have hit,” said kicker Mike Nugent, who set a Bengals record with a 57-yarder for one of their few bright spots.

Actually, it’s more like slipping and falling without even getting the kick off.

No matter what they accomplish during the season — and their four straight playoff appearances are a franchise record — they come unglued in the biggest games.

“In the big moments, the guys that are our big guys have to make the plays,” left tackle Andrew Whitworth said. “You see it every week. You look at the teams that win, their top guys make the plays that get them where they’ve got to go. It’ll be no different here. When we get in those situations, our big players have to make huge plays.”

And it starts with the quarterback.

Dalton and Baltimore’s Joe Flacco are the only quarterbacks in the Super Bowl era to lead their teams to the playoffs in each of their first four seasons. Flacco already has won a Super Bowl and has his team headed to New England next week after pulling out a win in Pittsburgh on Saturday.

Dalton is headed home after another lopsided one-and-done.

“You’ve got to play your best football once you’re here, and today we didn’t play our best,” said Dalton, who was 18 of 35 for 155 yards with three sacks, a fumble and a passer rating of only 63.4.

Dalton didn’t make the type of costly turnover that doomed the Bengals in their previous three playoff losses. He didn’t do much of anything noteworthy, showing there’s a difference between him and the NFL’s elite quarterbacks.

Those other ones — such as Luck — make impressive plays under intense pressure. Luck was 31 of 44 for 376 yards with a touchdown and an impressive passer rating of 104 on Sunday.

In his four playoff games, Dalton has completed only 56 percent of his passes for 873 yards with 12 sacks, one touchdown, six interceptions, two fumbles and a passer rating of 57.8. Dalton is tied with Warren Moon for most consecutive opening-round playoff losses by a quarterback in NFL history, according to STATS.

Dalton got a big contract extension before the season, so the Bengals are committed to him for at least the near future.

“I thought Andy played a good football game, so I don’t know what kind of criticism will be on the quarterback here,” coach Marvin Lewis said. “I thought he hung in there.”

With Pro Bowl receiver A.J. Green and tight end Jermaine Gresham sidelined by a concussion and a sore back, respectively, Dalton was missing his top two receivers. The Bengals took a lot of tricks out of their playbook and stayed close for a half.

In the second half, the smoke-and-mirrors stopped working. Cincinnati had the ball four times in the third quarter and punted four times, managing a net of only 9 yards on 13 plays while the Colts pulled away.

The Bengals haven’t won a playoff game since the 1990 season, the sixth-longest streak of postseason futility in NFL history. Lewis fell to 0-6 in the playoffs, trying Jim Mora for most consecutive postseason losses to start a coaching career.

Lewis also matched Mora, Marty Schottenheimer and Steve Owen for most consecutive coaching losses in the playoffs. He’s under contract through next season, and owner Mike Brown has called him a success for getting the team to the playoffs regularly, so no change is anticipated.

Notes: The Bengals are 0-7 on the road in the playoffs, in addition to losing their two Super Bowls against San Francisco. … Cincinnati has lost its past eight games in Indianapolis. … Green also missed a 27-0 loss at Indianapolis on Oct. 19 because of an injured right big toe. … It was the second game that Gresham missed this season. … Linebacker Rey Maualuga left with an injured hamstring early in the second quarter and didn’t return. The Bengals already were missing linebacker Vontaze Burfict. … Cornerback Dre Kirkpatrick left with an injured right ankle.