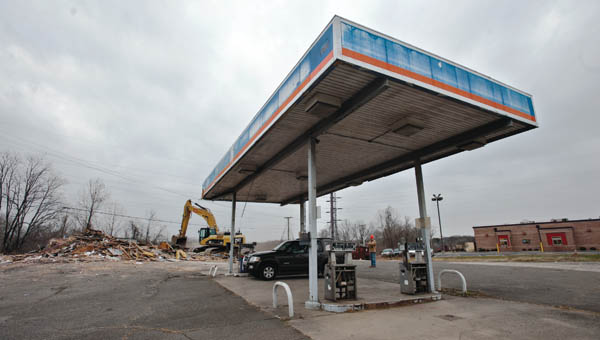 THE TRIBUNE/JESSICA ST JAMES
View of the drive in area of the former Gulf gas station located next to Wendy’s in Coal Grove.

COAL GROVE ­­ — A mobile lab is scheduled to be in place today at the site of the former Jim’s service station on Marion Pike to start contamination tests.

“Depending on the soil condition, we hope to be done at Coal Grove by the middle of next week” Jeremy Clay, director of The Point industrial park, said.

The game plan is to have the parcel ready to market for a commercial development.

In July the Lawrence Economic Development Corporation purchased the former Coal Grove station and a Rich Oil station at Lorain and Third streets. The goal is to remediate both sites and sell them to commercial enterprises.

“As soon as we pull the tanks, we will start taking samples of the earth testing for contamination,” Clay said.

PetroEnvironmental of Cincinnati is in charge of the remediation.

“Typically they send the samples off to get analyzed,” Clay said. “But we have a mobile lab on site and that is the contractor’s responsibility.”

Crews will take samples of earth to test it, remove contamination and continue until the earth is free of contaminants.

“They test it until it is free and clear,” Clay said.

After the Coal Grove site is clear, the Cincinnati crew will go onto the Lorain Street station.

When that is also remediated, it will be marketed as well.

The LEDC also wants to acquire three other stations to clean up to attract new business.

“It will make a difference one at a time,” Clay said. “It has a lot of opportunities.”

COLUMBUS — Will a friendly, familiar face heading up one of the most influential committees at the statehouse help Lawrence... read more