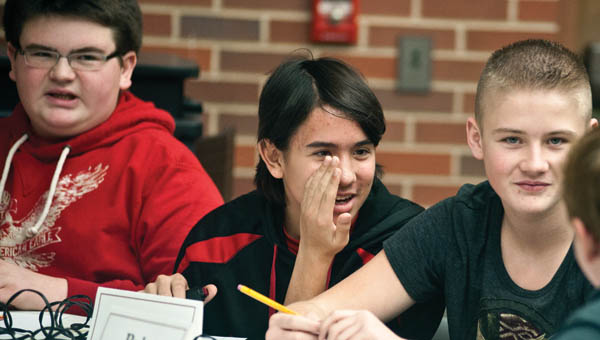 Editor’s note: Selected questions from the quiz bowl in bold.

The answer is zero. The question is how many times did the Rock Hill team lose on its way to winning the annual Lawrence County Middle School Quiz Bowl Tournament on Tuesday in the Bowman Auditorium at Ohio University Southern.

“We are very excited,” Trena Haynes, coach of the Rock Hill quiz bowl team, said after the Redmen secured a spot in the final. “We didn’t make it to the final last year.”

(Q: What is the largest hot desert in the world? A: The Sahara)

At the middle school level, quiz bowl is a competitive, academic, interscholastic activity for which players attend periodic practices and then represent their school at tournaments. Those tournaments may be based on the school’s athletic conference, school district, county, or state; they may also be open to all comers. 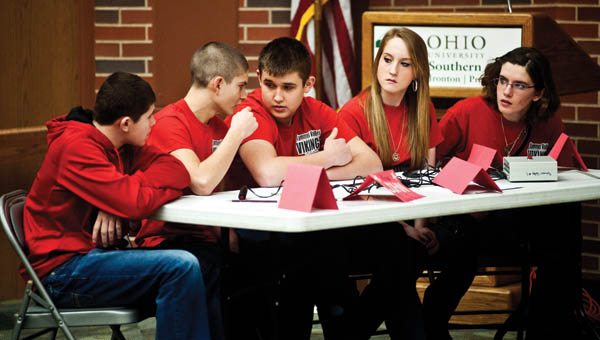 (Q: What name is given to a group of cells of the same kind? A: Tissue)

Quiz bowl questions range over the spectrum of the middle school curriculum and include a certain amount of current events, sports and popular culture. The matches feature a blend of individual competition and team collaboration. Quiz bowl can reinforce classroom lessons and also encourage players to go beyond their assignments to master other areas as well, according to the website for the National Academic Quiz Tournaments. Tournament competition is a major aspect to a school’s quiz bowl program.

(Q: The Lord of the Rings trilogy and The Hobbit take place in what fictional universe? A: Middle-Earth)

Dawson-Bryant advanced by eliminating Ironton in the quarterfinals, which set up a semifinal match against two-time defending tournament champion St. Joe.

(Q: Who was the first person to describe gravity after watching an apple fall from a tree? A: Sir Isaac Newton) 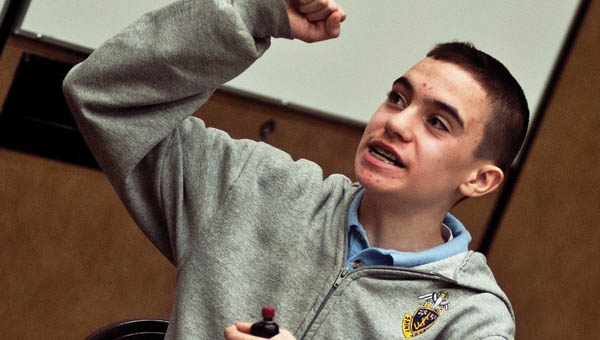 THE TRIBUNE/JESSICA ST JAMES
“Give me liberty or give me death,” says St. Joseph student Jon Cade on Tuesday as he completes the statement by founding father Patrick Henry during the annual quiz bowl competition against South Point Middle School.

Dawson-Bryant defeated St. Joe and went on to the championship match against Rock Hill. To win the double-elimination tournament, Dawson-Bryant would have had to defeat Rock Hill twice in the final.

CHESAPEAKE — Water projects to better protect and serve the village of Chesapeake was the motivation for recent work by... read more