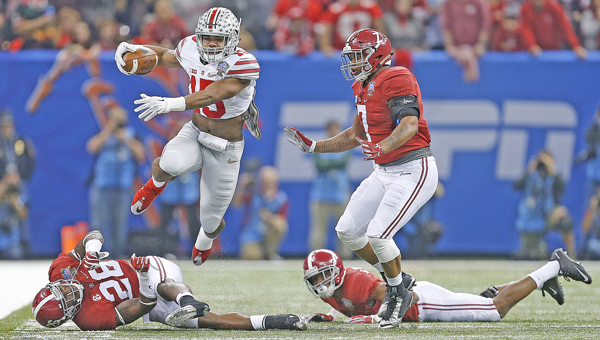 Ohio State Buckeyes running back Ezekiel Elliott (15) leaps over Alabama Crimson Tide defensive back Landon Collins (26) on his way to a 54-yard run in the first quarter of the All-State Sugar Bowl and College Football Playoff Semifinal on Jan. 1 at Mercedes-Benz Superdome in New Orleans. Ohio State plays Oregon on Monday for the national championship. (MCT Direct Photo)

COLUMBUS (AP) — Ezekiel Elliott’s eyes saw running room ahead. It was what was behind him that concerned him the most.

As the Ohio State back scissored through a hole around left end and broke into the clear down the sideline in the Sugar Bowl, he knew he had no one in front of him. Just in case, he glanced up at the gigantic video board above the end zone to make sure no one from Alabama was gaining on him.

“I’m looking up at the Jumbotron and seeing the guys behind me, if they’re close enough so I could slow down a little bit,” he said, grinning.

They weren’t. Elliott’s stunning run, covering 85 yards with 3:24 left, proved to be the padding the Buckeyes needed in a 42-35 victory that pushed them into the Jan. 12 national championship game against Oregon in Arlington, Texas.

It’ll be hard for Elliott to spy on his pursuers at AT&T Stadium, because the video boards are overhead and not at the ends of the field.

But Elliott has a plan for that, too. He cites a reluctant running star (for Alabama) in a legendary film.

Odds are the millions at home and 74,682 fans in the Sugar Bowl watching Elliott’s eyes staring at the video board didn’t know much about the sophomore from St. Louis. Soft-spoken and self-effacing, the first-year starter will be much better known and more of a focal point when the Buckeyes meet the Ducks on Jan. 12.

He’s more than a runner, too. He’s also a great blocker, although few beyond his teammates even notice.

“Ezekiel Elliott plays as hard as any back I’ve ever witnessed without the ball,” coach Urban Meyer said.

Taking over for the graduated Carlos Hyde and his 1,521 yards a year ago, Elliott has followed a get-to-know-you freshman year by rushing for 1,632 yards and 14 touchdowns — including a jaw-dropping 220 yards on 20 carries against Wisconsin in the Big Ten title game with 230 more again on 20 carries against the Crimson Tide. And he spent the year having trouble gripping the ball after breaking a bone in his left hand during August camp.

“He (reads blocking patterns) instinctively and then explodes into open seams,” Ed Warinner, Ohio State’s line coach and co-offensive coordinator said. “He loves football and plays every snap like it’s his last.”

Elliott’s dad, Stacy, played football at Missouri, and his mom, Dawn, was a member of the track and field team. It seemed a foregone conclusion that the four-star prospect, who led his high school to the state title game as a senior while rushing for 2,155 yards, would go to nearby Mizzou.

But he visited Ohio State, fell in love with the campus and Ohio’s passion for all things Buckeye. He never really looked back. His parents had no problem with the choice.

Now, Elliott’s glance at the video board is prominent on Ohio State’s athletic website — and could end up being the signature moment of the Buckeyes’ season.

Some were surprised that someone from the lumbering Big Ten could outrun players from the Southeastern Conference.

“Somebody asked me about SEC speed. I just was, like, what is SEC speed?” he said of his sprint, in which he appeared to be pulling away at the end. “Every conference has speed. Coach Meyer really recruits speed. I don’t know why that was supposed to be such a big deal.”

It was receiver Evan Spencer who not only wiped out two defenders with a crunching block on Elliott’s long run, but also had the closest view of how the play unfolded.

“I was supposed to go in motion and (quarterback Cardale Jones) checked the play and I just didn’t see it. So I went in there and I was kind of in a panic mode,” Spencer said. “I saw the guy I was supposed to hit, so I went in there and tried to clean him up to the best of my ability. Then I felt two dudes hit me and all of a sudden the crowd’s going wild and I looked up and (Elliott) was gone. I tried to run after them and celebrate.”

No one caught him, regardless of the color of their uniform, until he watched himself enter the end zone.

Jim Walker jim.walker@irontontribune.com   The Hot Stove League is getting ready to heat up the Tri-State area. The annual Cincinnati... read more