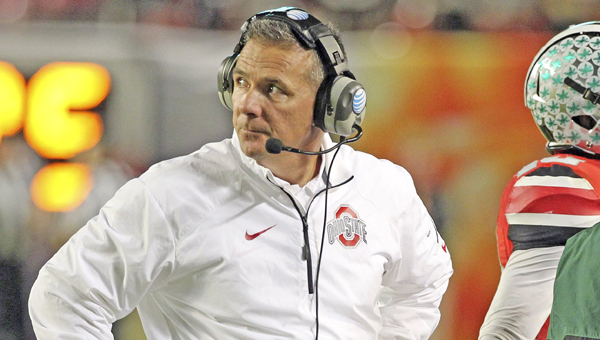 DALLAS (AP) — When Urban Meyer took a year off from coaching, he made a trip to Oregon to visit an old friend — Ducks defensive coordinator Nick Aliotti — and to find out how Chip Kelly was running the show in Eugene.

Both Meyer and Kelly had an affinity for spread offenses, but Xs and Os were not necessarily Meyer’s most important takeaway. Oregon had become a program in synch from top to bottom, from ball boys to the quarterbacks.

Some of the former Oregon coach’s methods were nothing like what Meyer would have ever considered, but everyone on campus seemed to be buying in.

“You know, you go in (to Oregon’s practices), they are playing ‘Lion King’ music,” Meyer said. “They have like a DJ at practice, bizarre stuff now. I remember even I was like, ‘What is this?”’

After Ohio State beat Alabama to earn a spot opposite Oregon in the first College Football Playoff national championship game on Monday night, Meyer spoke so glowingly about how well the two programs know each other some might have thought the coaches were exchanging Christmas cards.

“I think that was the relationship that Chip and Urban had, I’m not privy to that. But we’re very friendly,” Oregon coach Mark Helfrich said earlier this week with a smile. “It depends on how much we know the other party, but we try to gather more information than we send out.”

Sharing of ideas is fairly common in college football. Out-of-work coaches, as Meyer was in 2011, often make campus tours to keep up on best practices and new strategies.

Oregon, however, is not big on sharing. Which means Meyer may be one of a precious few who’ve had a recent glance at the program.

Offensive coordinator Scott Frost said Oregon now tends to keep to itself because it didn’t seem to be getting as much as it was giving in the idea exchange. Oregon likes to consider itself cutting edge and its up-tempo spread offense has inspired legions of copycats throughout college football.

Helfrich said it goes both ways.

“We steal stuff too. We’re equal opportunity thieves,” he said. “That can happen, and yet it’s been funny, especially growing up around this area in recruiting, some people use your style against you during recruiting then do it on the field, which is kind of weird.”

Despite what he’s seen, Meyer is not quite all-in on up-tempo.

“Yeah, at Florida, there’s a misunderstanding that we were a big tempo team,” he said. “We weren’t. And I fought that. We actually sent Dan Mullen, who was my coordinator, to Missouri when Missouri had a breakout season. And they came back and … I snatched that after about four days of spring practice. Technique went to hell and our receivers coach is over there signaling instead of coaching receivers and … we ended that real fast.”

But not for good. Ohio State increases the pace offensively, and might be moving at a more Oregon-esque rate if not for having to shuffle through quarterbacks.

“It’s an advantage for the offense,” Meyer said. “And if you don’t take it, then that’s fine. But even I know Alabama is moving in that direction. Is it full speed all the time? We’re not. But certainly that gives us an advantage at times.”

Oregon and Ohio State’s offenses might look a lot alike, but just like the relationship between the coaching staffs, the deeper the examination, the more the separation is revealed.

“I think we’re a lot more different than we are similar, and that’s personnel-driven,” Helfrich said. “Their strengths are different from our strengths, but there’s definitely some similarities to it.”

How the teams match up in the college football championship game

DALLAS (AP) — The first College Football Playoff national championship game between Oregon and Ohio State will be all about... read more