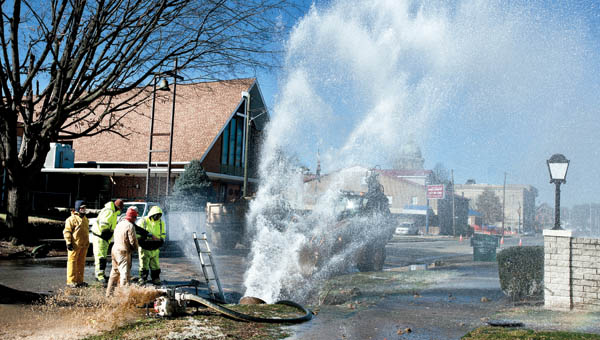 Water gushes as crews work to repair a burst water line on the corner of South Fifth and Washington streets in downtown Ironton.

Ironton Mayor Rich Blankenship got a call at 6:15 a.m. that water was gushing out of the streets at the intersection at South Fifth and Washington.

“I started calling people out,” he said. “I called several people out to be able to switch out when workers got wet and tired.”

After street crews starting digging up part of the asphalt, they found three holes in the top of the 8-inch water line that serves nearby homes and the Briggs Lawrence County Library.

“The pipe has a lot of force on it,” Blankenship said. “It is not only a big job, but it was 8 degrees out there.”

By noon the mayor was anticipating the job to take several more hours as crews cut out the damaged pipe to replace it with another piece.

Because of the high pressure on the line, the water coming out didn’t freeze as it ran into the catch basin.

Those living in the neighborhood experienced low water pressure. The library opened at 10 a.m. but closed its restrooms to the public.

Blankenship said there would not be a boil water advisory.