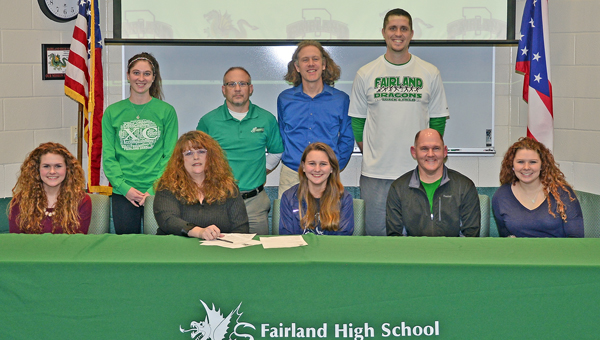 PROCTORVILLE — Jessica Price runs down a lot of different roads. But on Monday, she decided on which path she plans to make regular trips.

The Fairland Lady Dragons senior cross country, track and soccer player decided that she would run for the offer of her favorite sport as she signed to run cross country and track at Shawnee State University.

“I love cross country. It’s a fun sport,” said Price. “I knew in middle school I wanted to do a college sport. I was into soccer. I started to run cross country and I liked it a lot more.”

Price’s love for cross country and track was the road Shawnee State 10-year veteran coach Eric Putnam hoped she would decide to travel.

“She has a lot of potential,” said Putnam. “We’ve ha a lot of luck with Fairland runners at Shawnee. Coach (Chuck) Wentz doesn’t over-train them so there is a lot of room to grow.”

Wentz agreed with Putnam that Price has a great future as a college runner.

“She can focus on running. She did cross country and soccer at the same time and that cost her some time,” said Wentz.

“She can focus on running now. She has a shot at being an All-American. She had the second fastest time behind (teammate) Shanan Ashton. She has a great cross between track and cross country. She has great speed and great endurance to go with it.”

Price understands that there is still work to be done if she is going to make the jump from high school to college.

Price plans to major in biology and wants to study marine biology in the future.

Jim Walker jim.walker@irontontribune.com   It seemed like everyone was pulling “double duty” for the Ironton Lady Fighting Tigers. Ironton had... read more