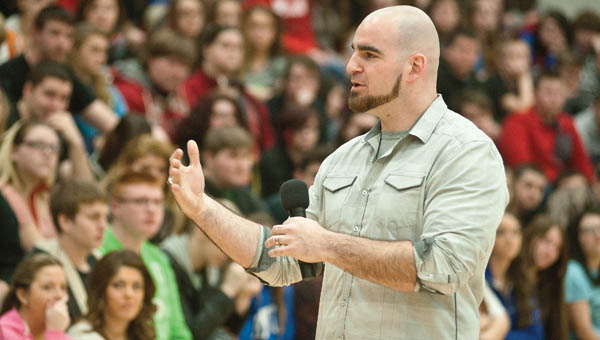 “It takes commitment,” Penton told Dawson-Bryant students on Thursday during an assembly. “It takes standing your ground.”

A native of Van Wert, Penton is now a youth motivational speaker. During his five years as a Buckeye (2002-2006), Penton was a member of teams that won three Big 10 and one national championship. He was a four-time All-Academic Big 10 selection.

“I often get asked what it’s like to play college football,” he said. “The truth is, as fun as it is, it takes a lot of hard work. It takes a lot of commitment. It takes someone who has the willingness to make the right commitments but then, even more importantly, to actually keep their commitments.”

Penton now travels the country and has spoken at more than 500 schools and to more than half a million people. The theme of his school assembly is “Stand your ground, don’t back down.”

Penton asked the students if they have noticed that it is becoming more common for people to make commitments, and subsequently break them.

“People are making more commitments,” he said. “It’s also becoming more common, however, for people to break those commitments. I think it is safe to say there is not a single person in this gym right now who has not been impacted by someone breaking a commitment.”

“It takes character and will and the road will be hard,” he said, “but it is possible to keep a commitment.”

What can set someone apart from someone else is not the commitments they make, he said, but their willingness to follow through.

“Whether it’s academically, athletically or in your personal life, what can set you apart isn’t your commitments, it’s your ability to simply keep your commitments. Stand your ground, do something incredible.”

Penton said he made a commitment when he was 9 years old when he was introduced to football.

“I immediately fell in love with the game of football,” he said. “I just loved as a small child putting on those plastic pads and running around as fast as I could and slamming my body into other small children.”

He said in his seventh-grade year he decided he was going to be the best football player he could possibly be.

“I started working really hard,” he said. “I was doing push-ups and pull-ups and walking around squeezing a ball to strengthen my forearms. All of this to keep my commitment to be the best football player I could be.”

More information and booking contacts are available on www.joelpenton.com.

Medical bills could get decreased: Boggs to ask for more money to appropriate