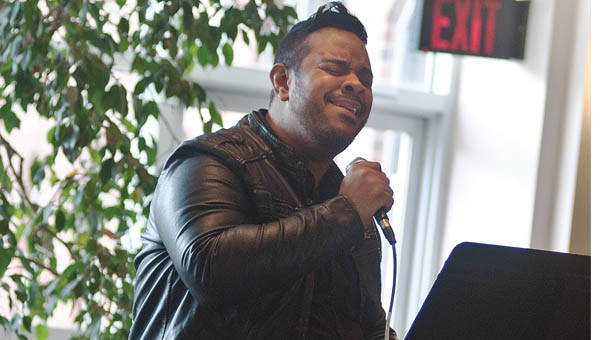 “This is my second time performing for Brown Bag,” Payne said. “I love singing and performing. I started singing when I was 8 years old at Mt. Olive Baptist Church right here in Ironton.”

Payne on Wednesday chose to tailor his song selection to reflect the legacy of Dr. Martin Luther King, singing songs such as “We Shall Overcome” and “Go Tell It On the Mountain.”

Payne is an Ironton native and graduate of Ironton High School. He received bachelor’s degrees from Ohio University and his masters from the University of Dayton.

Payne is adding to his already extensive repertoire of theater experience with “Cinderella,” where he will play the king at the Paramount Arts Center in Ashland on March 20 and 21.

The free Brown Bag concerts are at noon on Wednesday in the Riffe Center Mains Rotunda at OUS in Ironton.