Angry Reds plan to bounce back 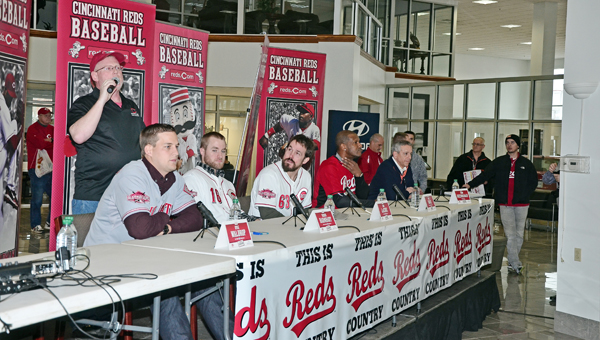 ASHLAND, Ky. — There was a movie once called “12 Angry Men.” The Cincinnati Reds could easily be 12 angry men times two.

After being picked to win the Central Division championship last year, Cincinnati won only to win 76 games and finished 14 games out of first place and fourth in a five-team division, Reds’ catcher Tucker Barnhart said this team has a chip on its shoulder.

“We’re going into this year with a sense of being ticked off,” said Barnhart during Saturday’s Reds Caravan stop at Fannin Motors.

“If you’re angry, you play better. We’ve got something to prove.”

Latos has since been traded, but the others are expected to be at full strength and ready to return to their former selves.

“(Zack Cozart) is a gold glove shortstop who has produced at every level he’s played. He had a fluke year like Jay last season. He’s going to produce.”

Beyond the injuries, the Reds had other problems that included a bullpen that struggled almost the entire season.

The Reds’ bullpen was considered the best in baseball two years ago before slumping last season. Reliever Sam LeCure — who made the tour stop — said the bullpen members are also angry with their performances.

“We’re not going to be the worse like last year. We know we’re better than we were,” said LeCure with conviction in his voice.

“Hopefully, Sean Marshall is healthy because he’s once of the best left-handers in baseball. Manny Para will be healthy, Chappy (Aroldis Chapman) will do his thing, Jumbo Diaz was a nice addition and I expect a much better year out of myself.”

Reds’ general manager Walt Jocketty was supposed to be part of the East Tour but became ill on Friday night and returned to Cincinnati.

The Reds open the regular season on Monday, April 6, against the Pittsburgh Pirates.

Jim Walker jim.walker@irontontribune.com   But I’ve got a blank space baby, and I’ll write your name. With apologies to Taylor... read more