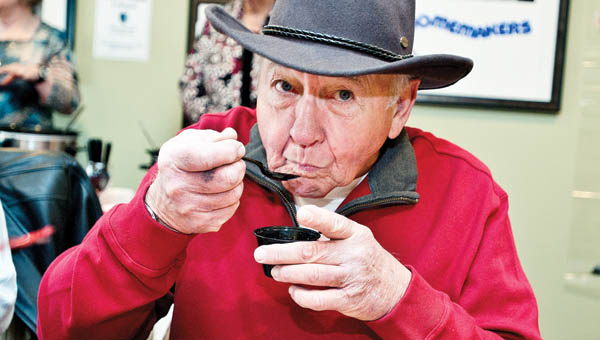 Darrell Riley takes a mouthful of chili as he and others take part in the event.

ROME TOWNSHIP — The staccato trumpet of Herb Alpert’s recording of “Spanish Flea” danced throughout the recreation room at the Wyngate at River’s Edge as Julie Poff, activities manager, donned in a sombrero and striped serape, greeted guests.

Saturday was the inaugural chili cookoff that brought out Wyngate residents and the eastern end community to sample the secret recipes of 15 chilis, created by businesses, social service agencies, individuals and churches.

“Every month we do a community event,” Rachel Sargent, Wyngate residence manager, said. “We thought it’s January. It cold so let’s do a chili fest. We want to make this an annual event.”

Jack Chapman of Rome Township had the distinction of running out of his special recipe first.

“I use ground beef, pinto beans, tomato sauce, crushed tomatoes and all the spices,” he said. “My brother and I used to get together to watch football games and we’d experiment making chili.”

And what was that extra something in Chapman’s dish? Cinnamon.

“Just enough to make you wonder what that taste is,” he said.

Billi Jo White took ingredients from his farm in Gallia County for his secret blend.

“We raise our own tomatoes and our own beef,” he said. “My dad taught me how to make it.”

Phyllis Gillespie of New Hope United Methodist Church took a cue from a family recipe and added a potato to her stew.

“We always did that,” she said.

Gillespie comes once a week to conduct the Chair Yoga classes for the residents.

One of Heinz’s 57 was that special something in the chili made by Marla and Dick Gilpin of Chesapeake. In this case it was Heinz brown gravy added to ground sirloin, beans and bouillon cubes.

Gilpin’s trophy shop in Chesapeake also supplied the trophy that the winner of the cookoff got, along with a chili basket filled with the fixings for another pot of the hot stuff.

The residential facility has a special event each month. In February there will be a craft bazaar and right now vendors are being sought. There is no table fee and a free lunch will be provided for them.