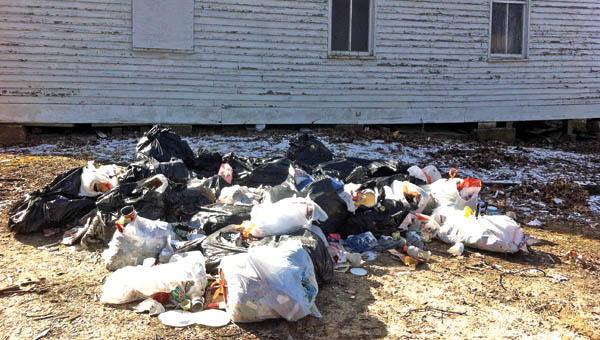 Household waste was illegally dumped on a church parking lot at 76 Township Road 1485 in South Point at the intersection of Burlington-Macedonia and Charlie Creek roads in Fayette Township.

Lawrence-Scioto Solid Waste Management District Coordinator Dan Palmer and enforcement officer Steve Hileman expressed concern recently about a possible increase in open dumping throughout the county because of the closure of the Iron Valley Landfill.

“We are out there,” Palmer said. “We are watching.”

Hileman received a complaint last year that someone dumped household waste on a church parking lot at 76 Township Road 1485 in South Point at the intersection of Burlington-Macedonia and Charlie Creek roads in Fayette Township.

Hileman said he spoke with Medley’s wife, gave her his card and advised her to have Medley call him.

“He came to the office and advised me he already knew why I wanted to speak with him,” Hileman said. “He said he dumped all the trash in the church parking lot.”

The case was heard in court on Jan. 20 after a warrant was issued for his arrest. The violation of the open dumping law was reduced to third-degree misdemeanor littering. Medley was ordered to pay $45 in restitution to the solid waste district, a $200 fine plus court costs. 30 hours of community service working on the district’s litter crew, 30 days in jail with 28 days suspended and one year of probation.

“We can’t thank the county prosecutor’s staff, the sheriff’s office and the judges enough,” Palmer said. “They believe in what we are doing and support us immensely.”

This past Thursday another case was heard in court concerning the operation of a landfill without a permit.

George Aldridge of 17 Private Drive 101 on Corryville Road was found guilty of a second-degree misdemeanor and ordered to pay $500 in court costs. He was also sentenced to one year of probation and 60-days in jail, which was suspended.

“Mr. Aldridge has since cleaned up his property,” Palmer said. “Again, we can’t stress enough how important it is to call our office if you even suspect someone of open dumping.”

PROCTORVILLE— A new partnership is on the radar for the Huntington Area Habitat for Humanity. “Coming up, we’ll be working... read more