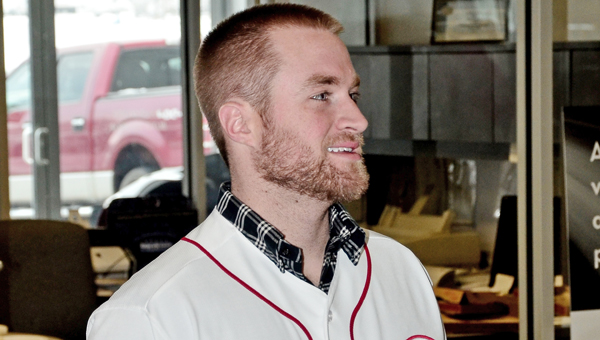 Barnhart has a similar view of the Reds’ team as he looks upon the entire 40-man roster and hopes to be part of the final 25 players who will see time on the playing field when the 2015 season begins on April 6.

Sitting ahead of Barnhart on the depth charts are incumbent Devin Mesoraco and 33-year-old back-up Brayan Pena.

Although unseating Mesoraco doesn’t seem realistic, Barnhart knows he has a chance to make the 25-man major league roster.

“I’m going to go to spring training and see what happens. I’m not sure they will carry three catchers, so I want to put some good thoughts in their heads,” said Barnhart during the Reds Caravan area stop on Saturday.

However, the switch-hitting catcher has had seasons in the minor leagues of .306 at Billings, .273 at Dayton, .260 at Pensacola and .246 last season at Class AAA Louisville.

“Every level I’ve been at I’ve been able to produce,” said Barnhart. “It’s like anything. The more confidence I get, I get more comfortable and the more I produce.”

During his six minor league seasons that total 357 games, Barnhart has thrown out 42 percent of runners attempting to steal. He has been guilty of only 31 passed balls and won a minor league Rawlings’ Gold Glove in 2011.

The Reds traded starting pitchers Mat Latos and Alfredo Simon during the off-season and acquired 37-year-old outfielder Marlon Byrd from Philadelphia in hopes of filling the void in left field.

Despite somewhat of an overhaul of the starting staff and bullpen, Barnhart doesn’t see a problem working with any of the pitchers.

“You just try to build a relationship. Spring training is good for that. You just talk over situations and do things you normally do. The guys I have caught continue with their same routines as in the past,” said Barnhart.

While some critics have questioned the addition of Byrd, Barnhart likes what the veteran outfielder brings to the Reds.

“He’s going to be a guy who adds veteran leadership. He’s always been a blue collar guy and that’s the way I play. That’s the kind of team I think we’ll be. We’ll be a blue collar team,” said Barnhart.

The Reds had baseball’s worst record in one-run games, the offense was riddled with injuries to 3-4-5 hitters in the line up, and a bullpen that was rated the best in baseball the previous season flopped as one of the worst in 2014.

First baseman Joey Votto — the National League 2010 MVP — played in just 62 games due to an injury, Gold Glove second baseman Brandon Phillips missed 41 games with a torn ligament in his thumb, and right-fielder Jay Bruce not only missed 25 games with an injury but played with pain for most of the season.

Reports from the Reds’ front office say Votto’s progress has been monitored and he is expected to report to spring training 100 percent healthy. Bruce says he is fine and doesn’t want to discuss the issue any more.

“The Reds have done a lot. The big thing is they’ve gotten healthy,” said Barnhart.

CLEVELAND (AP) — Josh Gordon’s troubles have deepened. He may be out of chances — and time. The wide receiver... read more