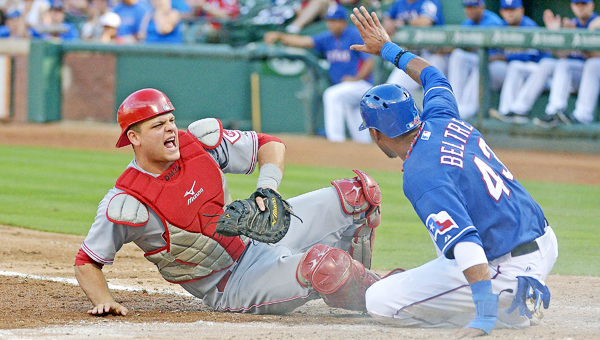 The Reds were trying to get deals with two other All-Stars, third baseman Todd Frazier and closer Aroldis Chapman. They haven’t had a player go to an arbitration hearing since 2004.

“He’s an example of a guy who has worked extremely hard and he’s the kind of guy you want to build an organization around,” general manager Walt Jocketty said.

The 26-year-old catcher was a first-round pick — the 15th overall — in the June 2007 draft. He started 84 games in 2013 and the Reds decided he was ready to become the full-time catcher last season, when he made $525,000. He surpassed their expectations on offense.

Mesoraco led all major league catchers in homers (25) and RBIs (80) while batting .273. His 24 homers while catching were the most by a Reds player since Johnny Bench in 1977.

“I think that before you do actually have success in this league, there is always a little bit of a question mark in your head just as far as if I can be successful,” Mesoraco said Monday after the deal was announced. “These are the toughest players in the world, so you have to actually go out there and do it, put up some numbers and produce out on the field before it’s 100 percent in your mind.

“But I definitely wasn’t lacking confidence going into last year and it showed.”

Mesoraco recognized that the deal makes him “someone that people and fans can count on for being part of the club and producing out on the field — me and Joey and Homer and guys like that, guys that the organization has committed to.”

Mesoraco had asked for $3.6 million in arbitration and the club had offered $2.45 million. Frazier is seeking $5.7 million and Chapman has asked for $8.7 million.